"EMBRACE THE UNCERTAINTY. ENJOY THE BEAUTY OF BECOMING. WHEN NOTHING IS CERTAIN, ANYTHING IS POSSIBLE."
- Mandy Hale

The Story of BECOMING

It was the worst case of writer’s block ever. For the last six months, Karen had been closeted in her apartment, willing herself to ink magic onto the page. And all she had to show for it was a pile of crumpled up paper, discarded cigarette butts and empty whiskey bottles.

Her editor had begun calling every day to check on her progress. That did nothing but elevate her stress levels. Frustrated and feeling smothered, she threw open her balcony window and collapsed on the floor inside. She would never venture out. Heights frightened her.

Attempting to calm herself with deep breaths, she looked out across the road to a line of pigeons perched on a defunct telegraph cable. One, in particular, caught her attention. Pure white, the colour of fresh snow, Karen could swear it was staring right back at her.

Suddenly feeling self-conscious, she slammed the window shut and went back to her desk. Still nothing. It was like her imagination had given up.

A few days later, Karen found herself sitting by her balcony window once more. This time, only the white pigeon sat on the cable outside. Again, it studied her, before cocking its head, seemingly gesturing at something.

Karen’s gaze followed the angle the bird was indicating. There, towering above the high-rises was the magnificent London Eye.

Karen shuddered. She had lived in this city her whole life but never had she ventured onto that terrifying contraption. Her acrophobia wouldn’t allow it.

And yet, something stirred within her. With one more glance at the pigeon now watching her again, Karen jumped up. Grabbing her phone and her bag, she didn’t stop to think until she found herself at the open door of one of the Eye’s pods.

“What the hell am I thinking?” she muttered to herself. About to back out, she jumped as a small blur of white flew past her head and landed in the observation capsule.

Her pigeon friend was on board for the ride.

Speechlessly, almost like she wasn’t in control of her actions, Karen stepped into the pod. Before she could change her mind, the doors closed, and the ride began.

A soundless scream escaped as panic set in. Trapped in this accursed construction, fear sprouted. But then, just as the capsule reached its pinnacle, something tripped in Karen’s mind.

A vision sprang uncalled into her head. The story of another world whipped through her imagination – a place where anything and everything was possible. Tableaus of characters and adventures exploded as if they were memories coming back to her from a distant past.

Madly, Karen pulled out her phone and started typing. She spent the whole day riding the wheel, without realising it – lost in the trance of creativity.

When she finally got home, she emailed the first draft of her manuscript to her editor. That Christmas, her book was on every bestseller list in the world.

By choosing this scarf, you are -

By choosing this garment, you are -

After you place your order, CelestreeStore will take 1 business day to prepare it for dispatch.

Estimated to arrive at your doorstep 01-12 Dec.!

You have 30 days from item delivery to dispatch this item back to the seller.

The name ‘Celestree’ is a combination of the words ‘celestial’ and ‘tree’. It refers to the concept that our world is a bejewelled fruit of the universe. And as such we are connected to something much greater than what our eyes can see.

Understanding this concept awakens us to the realisation that there is more to life than simply going through the motions. There is a grand expanse in which we can find our true selves. We only need to look inward, to that divine spark that lights and guides us all. In it, spiritual discovery awaits.

Your Celestree scarf is a wardrobe investment. To ensure its longevity, keep it away from sharp objects or abrasive surfaces that can rip or pull on the fabric weave.

We recommend dry-cleaning to avoid shrinkage and damage to our pure merino wool scarves. Avoid bleach or tumble-drying. And only use a medium heat-setting when ironing.

Absolutely. Everything we do, we do with love. As human beings, we owe each other care and gratitude. To that effect, you can rest assured we adhere to strict ethical standards. We’ve chosen a manufacturing partner that complies to the Amfori BSCI code of conduct, to ensure:
Fair wages and healthy working conditions, throughout our supply chain,
No child labour is used or encouraged,
Discrimination is eliminated, and,
All transactions are transparent and conducted with honesty.

This conscious consideration and love also apply to our Earth. We believe as you do that Gaia, Mother Nature, has for too long felt the burden of human selfishness. That’s why we take all possible steps to ensure our operations are eco-friendly, cut down on plastic.

Inspired by his sheroes, Celestree founder, Meher Kanigiri personally designs every scarf. This makes each one absolutely unique to the Celestree brand.

Chosen for its sensual texture and beautiful draping properties, this fabric is the perfect canvas for alluring depictions. The result? Your scarf looks opulent and feels exquisite, wrapped artistically around your neck.

Definitely. We wouldn’t be much of a love-centric brand if we didn’t care for our planet.

We unequivocally avoid contributing to the fast fashion industry by opting for universal, timeless designs that can be worn regardless of season. And by choosing organic fabric we steer clear of poly-blends that release microplastic particles into the environment.

It doesn’t stop there. We opt for digital printing (with azo-free dyes), which is less resource-intensive than traditional methods. And our scarves are completely biodegradable, as is our paper and card-based packaging. But most importantly, we will never stop trying to do even better, with every step into the future.

Opening your Celestree order is an experience in itself. Arriving in a premium giftbox, adorned with captivating illustrations and thoughts, your scarf is encased in a protective envelope.

Designed to honour the storytelling tradition of our scarves, this packaging is also fully recyclable. However, we encourage you to reuse it for storage or regifting. Green after all, is the new black.

CelestreeStore made this item with help from

Absolutely beautiful and so soft. Came exquisitely gift boxed too! Would highly recommend.

The scarf was a Christmas gift for my mom and she was over the moon in love with it. She was very impressed with the quality and beauty of the colors and design. Mehir even included a beautiful note that really touched her heart. I would highly recommend purchasing from this store.

Beyond beautiful wool scarf! The bee print is just sooo cool! I love quality garments, and this is beyond! Super quick shipping too! Thank you for sustainable garments!

The scarf looks even better than the photo shows. Nice light material and lovely design in blue on white/ivory. On each side of the scarf - length wise - there is this beautiful, intricate woven design that is about 3 inches wide [7.5cm]. Very impressed by it. Woven design is more beautiful than photo can show. The tassles are well made and add a nice touch. Very happy with purchase. Reasonable and acceptable shipping time, especially considering it came from Australia to Canada during COVID-19. Very happy with purchase. Would buy from this seller again. Left a personal note to me in package. Was shipped in a strong and beautiful box with a ribbon to protect content that was then put into a sturdy shipping envelope. I will enjoy my scarf and I know that I will get compliments on it. Thank you! 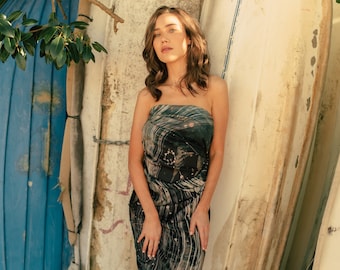 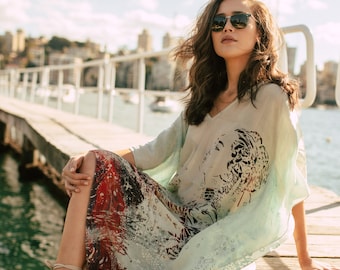 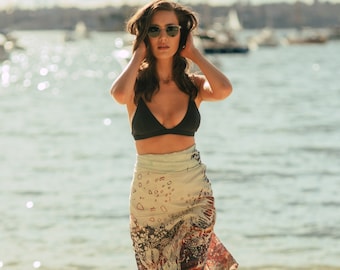 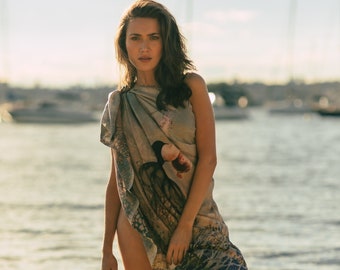 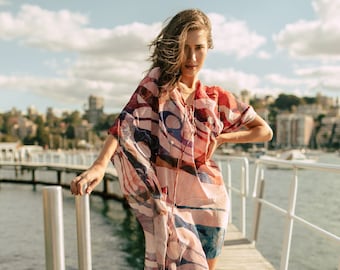 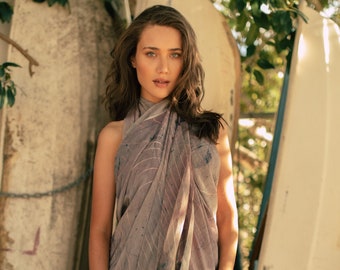