How to Make a Spooky DIY Bat Costume

Swoop into Halloween with this easy-to-make, oh-so-creepy DIY bat costume that's made by altering a simple knit shirt.

As the proud mama of a kindergarten-aged daughter, I operate in a universe of peer-influenced taste that runs the wide, wide spectrum from pink to princess to unicorn to pink. Needless to say, when my kid announced out of nowhere—with a ferocious snarl—that she intended to be a VAMPIRE BAT THAT DRINKS BLOOD for Halloween, I was pretty much thrilled. DIY bat costumes are on the easy end of the possible kids' costumes your littles could ask for. And a group of these pint-sized bats flying around the neighborhood Halloween party, chowing on spooky Halloween treats is quite the sight to see.

After confirming several times that she didn’t actually mean a pink princess unicorn vampire bat, I got to work making an easy DIY bat wing costume that will not only see her through this season’s Halloween activities, but dress up time for months to come.

Complete your DIY bat wings costume by adding black leggings or pants, a touch of fun Halloween makeup, and either a black headband or a pair of no-sew bat ears.

Fold your bat wing fabric in half and lay the shirt next to it flat, with the arm slightly raised and extending over the fabric.

Tie one end of the string to your chalk.

Easy DIY bat wing tip: Some moms report that using a soft knit jersey fabric prevents the need for hemming for an even faster no-sew DIY bat costume option. In this case you would not fold the fabric before cutting, and you could attach the wings with glue instead of stitching them.

Cut out the resulting shape—since the fabric is folded, you’ll have two pieces. Repeat on the opposite side of the shirt to create the second wing. You should now have four total wing shapes, two for each side of the shirt.

Step 3: Trace and cut inverted scallops on the diagonal

Grab a plate and trace half-circles along the curved edge of each pair of bat wing pieces and cut out.

With right sides together, sew a straight stitch along the curved edges of each bat wing.

Notch fabric along this side and clip the corners.

Turn the shirt inside-out. Carefully open up the seams of the shirt along its sides and the underside of the sleeves.

Insert the wings, lining up and pinning the two unsewn sides of each wing along the seams you’ve just opened on the shirt. It will look pretty bunched up, especially in the arms, so pin and then sew one side at time to make it easier to handle.

Sew a straight stitch along where you’ve pinned, essentially re-closing the seams of the shirt. When you turn the shirt right side out again, it will look like the photo. But don’t turn it yet—repeat with the opposite side first.

Alternately, to make a no-sew bat costume, you can use a fabric glue to attach your wing shapes along the seam of the T-shirt.

And then you’re all done! A DIY bat wings costume ideal for a halloween party, or even just for a true bat-lover. Put the shirt on your kid and watch them fly all over the house. 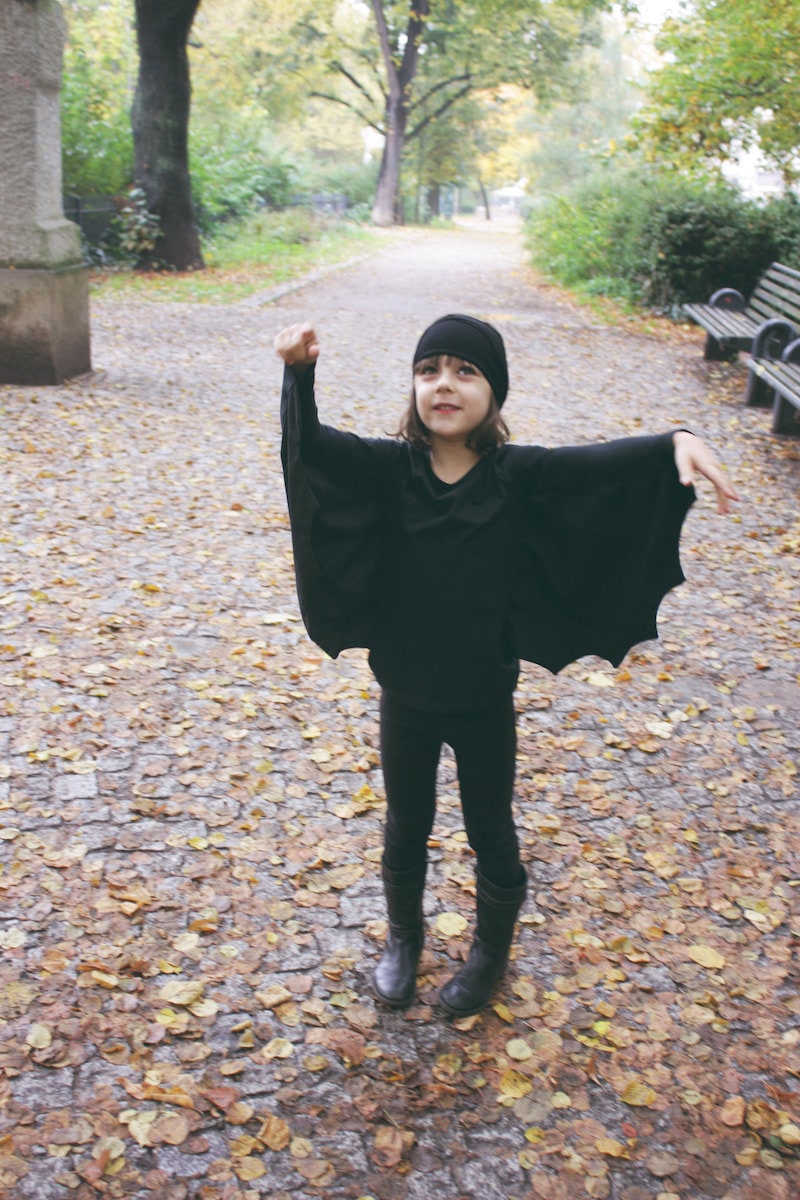 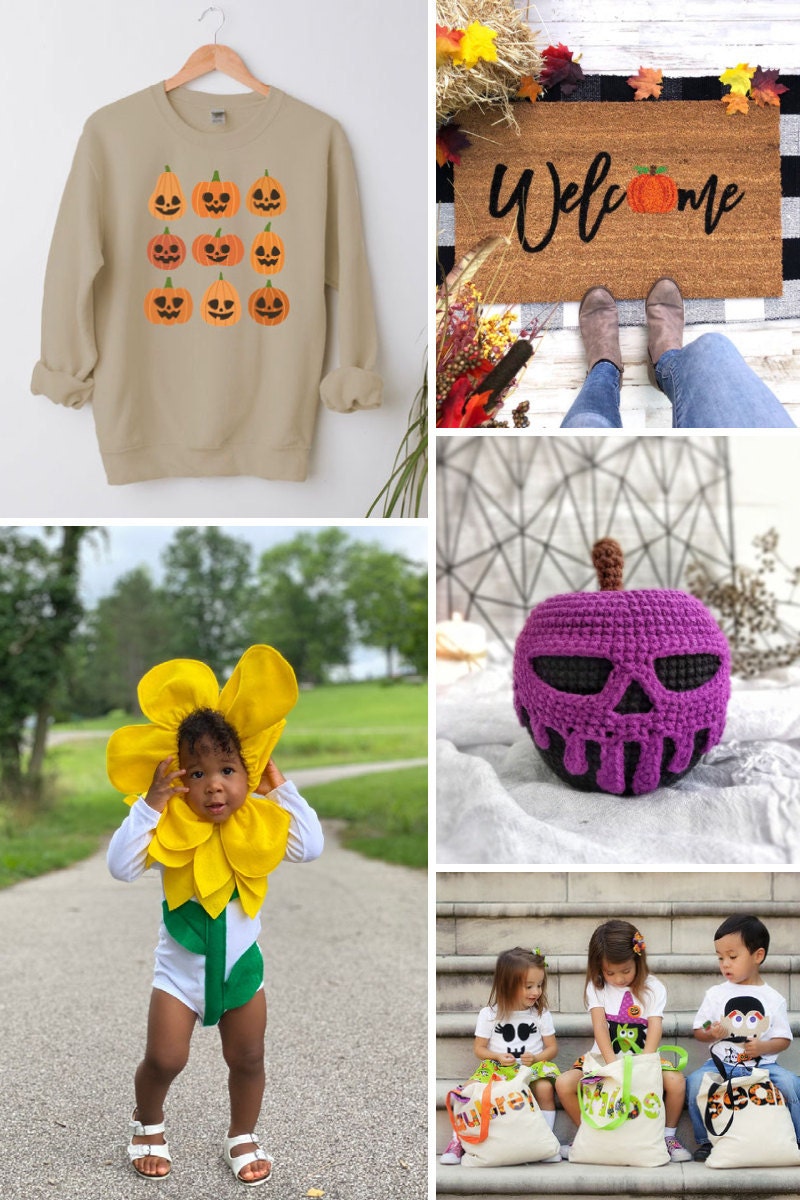 All photographs by Anda Corrie.

Anda Corrie is an American artist, armchair anthropologist, and autodidact living in Berlin, Germany with her young family. She works as a graphic designer for Etsy by day, and also frequently by night. Stalk her thrilling life on Pinterest, Spoonflower, Instagram, or her woefully neglected blog. These kitschy relics of mid-century cheer may have earned Charlie Brown's disdain, but aluminum Christmas trees are making a comeback with collectors. 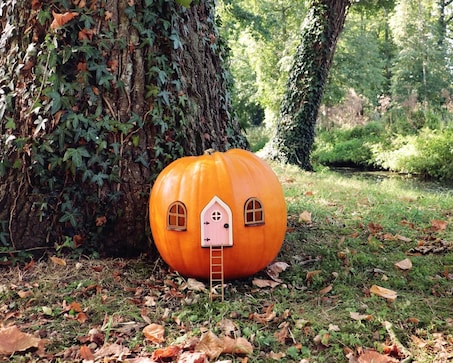 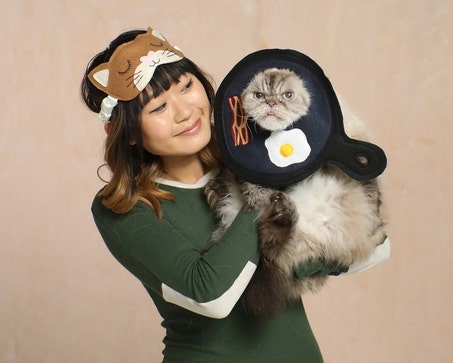 7 Matching Halloween Costume Ideas for You and Your Pet

Get ready to be the hit of the party with these ridiculously cute matching costumes for you and your furry BFF.