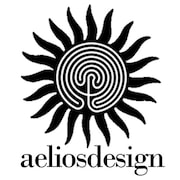 aeliosdesign is taking a short break

Note from shop owner I can't process any new orders right now, but if you check with me I may be able to ship items I have already made and are in stock. I will be checking message about once every couple weeks while my my shop remains in vacation mode. Thank you!

I can't process any new orders right now, but if you check with me I may be able to ship items I have already made and are in stock. I will be checking message about once every couple weeks while my my shop remains in vacation mode. Thank you!

That feeling of luxury... it's all in the jewellery...

aeliosdesign began while I was living abroad. I was always intrigued by beautiful handmade things and even had plans to be an interior designer or a fashion designer when I was small. I used to re-paint and re-decorate my room about once a year from when when I was 8 until I was 16. It drove my parents a little nuts... In junior high, I began drawing clothing, and with the help of my grandmother - who I miss dearly - patterns were made and dresses sewn.

After university - creative design isn't a real job right? law school, that was the ticket - I decided I wanted to get away from winter. (It's frigid about 6 months of the year here in Winnipeg). On a whim, I moved to Europe and there it all began.

After working in the travel industry, and even teaching English for a while, I discovered the tradition that led to my etsy shop. I was fortunate to live in an area that had a long-standing tradition in jewellery and knife making. Jewellery making was always a part of my life, from collecting beads to work with at little flea market bead shops during family trips to Athens to knotting friendship bracelets in middle school. Here I was able to get more intimate with it and had the chance to observe and learn from a few seasoned metalsmiths for a short time. Though I am mostly self-taught, they often helped me with trouble-shooting.

I eventually opened my own workshop and retail space in a small sea-side tourist town and began to photograph my work and share it on etsy. It is an amazing feeling to know that my designs are now worn by people all over the world from the US to Europe to Australia and Japan!

Life made it so that I had to return home to Canada, and now I make my living in my small home studio sharing my designs locally at art shows, festivals and craft fairs and with the world through the amazing opportunity of etsy.

Last updated on 09 May, 2022
Welcome to my shop policies. Tedious but necessary... If you don't find the answer to your questions here, please don't hesitate to convo me http://www.etsy.com/conversations/new?with_id=14333621

Returns & Refunds
I take pride in my work, and I craft all of my designs I make for you with great care.
If for any reason you are unhappy with your purchase, and return the item within 21 days in original unused condition, I will be happy to provide you with a refund for the purchase price and cost of the original shipping through paypal. I do not refund the cost of return shipping.

Damaged or Lost Items
In the unlikely event that your purchase is lost* or damaged in the post, I will take it upon myself to replace the item.
I kindly request that you return the damaged item to me before I ship out a replacement.

*An item is considered 'lost' if you have not received it within 6 weeks of shipment.

I am flexible, and if necessary, will bend the "rules".

PAYPAL
If you like something so much that you have to have it, you can use paypal to process your payment. If you have an account, great, but you *do not* need a paypal account to make a payment through paypal. Paypal is a third party transaction processor. You can use your credit card to securely make a payment through them. All of your information is confidential and will never be shared with anyone.
If you have any questions about how this works, I'll be glad to help. Just convo me with your questions.

GIFT CARDS
Someone got you an etsy gift card? How lucky you are! You're welcome to use it in my shop. :)

DIRECT CHECKOUT
You can now use etsy's direct checkout service to purchase from my collection! All major credit credit cards including visa, mastercard, american express and discover.

OTHER
The option to pay by 'other' is only available to bearers of gift certificates issued from my shop.

Canada Post
I will use Canada Post to ship your order within 3 weeks of receiving payment. Etsy automatically calculates the shipping cost based on your location.

Pick Up or Drop Off in Winnipeg
If you are in or near enough to Winnipeg, I would be happy to arrange a pick-up so you do not have to pay shipping. I would also drop off for a small fee. Please contact me to arrange this either before you purchase or let me know in the note to seller, and I can refund the automatic shipping cost.

Courier
If you would prefer that I use a courier to ship your item, I would be happy to do so. Please let me know in the message to seller. I will inform you of the additional charge for this, and send a paypal invoice requesting the difference.

Duties and Customs
If there are any additional duties, taxes or customs charged by your country to receive your item, these are your responsibility.

Packaging
I ship all of my items inside of a sturdy kraft paper recyclable box, that is tied with a fabric ribbon or string. This will come in a bubble padded envelope, along with a small product care card.

Gifts
If you are purchasing a gift, I can send any item (including gift certificates by email) directly to the gift recipient. If you would like to include a special note I would be happy to do this as well. Please let me know your requirements in the note to seller.

Incorrect Address
If you provide an incomplete or wrong address and the package is returned to me, I will send an invoice for the cost of postage to re-ship the package to you. I will re-send your package once it is paid and you have provided the correct address.

Hand Crafted Artisan Jewellery
Please note that all of my pieces are hand made by me. I fabricate all of my items with traditional methods and do not cast entire pieces. For these reasons there may be slight variations, which is the beauty in something hand crafted.

Custom Orders
If you see a design you like, but would prefer a different metal or stone, please convo me and I will do my best to meet your needs. I have a large supply of semi-precious stones on hand, as well as other materials that I use in my designs.
I would also be more than happy to work with you in creating a new design just for you!

Materials
I use all natural materials in my designs. Wood, leather, sterling silver, bronze, semi precious stones, fresh water pearls; all NATURAL, all REAL. You will not find "faux", "simulated", "crystals" or any other fancy words to describe my materials or components.

Recently it has become important to note that my metals are SOLID metals with the same material all the way through. Sterling silver is solid sterling silver, brass is brass and gold is solid gold. You may see silver filled or gold filled for less money; please be aware that these are filled with cheap base metal and then have silver or gold plating on top. It is better quality than simply silver or gold plated, as the finish is thicker, but it is not solid all the way through and is actually 'filled' with base metal.

Eco Friendly Methods
You will see that I state I use eco friendly methods in the creation of my jewellery and accessories. This means:
1. I do not use a chemical pickle to clean my pieces after soldering. I use a solution I mix myself using table salt and wine vinegar. This means that my pieces require extra polishing afterwards, but it is worth it to avoid chemicals that are damaging to our planet.
2. I do not use liver of sulphur to create patinas or oxidisation. Instead, I use a water-based solution made by jax.
3. I do a lot of sawing and piercing of metal. I use natural beeswax to keep my saw blade lubricated instead of the solid blue chemical lubricant on the market.
4. To refinish the wood pieces that I upcycle, I use an environmentally friendly, water soluble, wood stain. I don't use any chemicals at all. I finish the wood with numerous coats of organic olive oil.

Wholesale
If you would like to include items from my collection in your retail space, please convo me so we can discuss this.