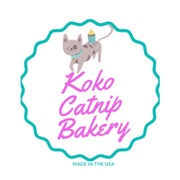 We make products with USA Made products.

KokoCatnipBakery is taking a short break

Note from shop owner We are taking a short break with all the storms in CALIFORNIA . 🤗
Thank you for your patience and your support 🍩
If you need something please contact us via email or Instagram kokothemiraclecat [!at] gmail.com

We are taking a short break with all the storms in CALIFORNIA . 🤗
Thank you for your patience and your support 🍩
If you need something please contact us via email or Instagram kokothemiraclecat [!at] gmail.com

Koko is our miracle cat

He was rescued at 2 months old. His first family had stepped on him , broke his jaw & his brain was exposed. He was blind in one eye but we did not know if it was from the trauma. We adopted Koko at 3.5 months & rehab him. A year later he started to have seizures so we did an MRI and the vet neuro said he has never seen it before - Koko only has half a brain the right side. So his meow is not quite a meow and he cant purr but he will grunt when he is happy.
I had a rare stroke at 43 & then I was left with rare brain AVM. So both Koko & I have brain pain issues.
We make these organic catnip/ valerian toys to raise money for no kill shelters, TNR rescue groups, other animal rescue relief issues such as Australia fires, & breast cancer awareness.
Thank you for shopping

For most cat and dog toys spot clean with warm water and let air dry unless otherwise stated in description.

For all other items unless wool wash on delicate/ cold and dry on delicate or Air dry.

Yes we do gift wrapping. We offer it year round, it’s another listing for $2.00 per order.
We have donut 🍩, unicorn 🦄, which are also made in the USA.
We also offer various Christmas wrapping which we can show you.

All Gift Orders come with a hand written gift card with your message.

Also if you prefer no tissue paper please add a note

Yes we do Custom orders - Just sent us a message. Please be sure of your measurements. 📐

If you need something bigger or smaller, different colors just send us a message.

If there is a yarn 🧶 you like and something you have in mind send us a message.

Do you combine shipping?

Yes we always combine shipping. Each additional item is 1.00 unless otherwise stated.

Why do you charge for shipping?

We charge for shipping because in order to provide free shipping we would have increase our prices across the board on each item almost $4.00 and if you are buying more than one item then you end paying more for the items.

Shipping from CA to East Coast minimum as of Oct 3rd for a package for my lightest item 4 Oz is $3.79.

Do you ship internationally?

We currently are only offering it on a few items because of the delays.
Please contact me if there are items you are interested in sending internationally.

When will my order ship ?

Your order will ship usually in a week from placing your order.
All orders are made fresh.
If there is no scent for a pet toy then it will normally ship faster.

Do you include printed invoices along with my order?

Yes we do include an itemized invoice with your order, which also has a coupon code for future use.

If you prefer not to receive the printed invoice and save a tree .
Please put a note along with your order and I will message you the coupon code.

Also if you prefer no tissue paper and ribbon not to be used and for us to reuse another envelope please send a 📝 note.

What are the supplies you use?

For all the cat toys and dog toys we use USA made yarn, Poly Fill ( Hypoallergenic) , USDA Certified Organic Catnip, & Organic Valerian root which does stink so if you haven’t ordered it before be prepared. You might want to order the combo first. My husband says it smells like his brothers stinky socks 🧦😹🤪. But I guess I am used to it.

We also purchase USA made cotton cloth to make toys as well.

Our scrubbiest are made out Korean Poly yarn most is made out China . Sadly there are no USA made manufactures.

If there is a yarn that you would like us to use on a custom project please let us know .

The crinkle material we use for the pet toys is made in the USA.

The squeakers are made in China. There are no other manufacturers.

Where can I find you on social media? And how do I suggest a rescue?