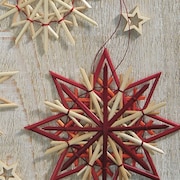 Announcement    I'm offering hand made straw ornaments. Each star is made by me personally.
Please visit my website www.strohsterne-bratz.de if you are looking for materials and tools for making straw stars youself.

I'm offering hand made straw ornaments. Each star is made by me personally.
Please visit my website www.strohsterne-bratz.de if you are looking for materials and tools for making straw stars youself.

In the late 90s, I made my first straw stars. I had stumbled upon a guide book on straw ornaments in a craft store. Tfter those first stars there was a break of ten years.
When our straw stars became shabby, I brought out tools and materials. And then it somehow "hooked" me. I kept on working after Christmas, getting deeper into the matter and the laying technique - both sensually and mathematically -, experimenting, optimizing, systematizing and perfecting.
2009 was my first time at a Christmas market and I opened my DaWanda shop (the German equivalent og etsa at that time). The success spoke in favor of continuing.
In 2010, the idea for a book came up. It should be thorough and systematic. I was lucky and was able to realize this idea with the Christophorus publishing house. It is a nice book with a separate technical part and it came out in 2011 under the title "straw stars - nostalgically beautiful". It is now out of print. A second volume was released in July 2015 under the title "Gorgeous Straw Stars". In 2018, a summary of both issues came on the market.
Since 2013 I also run my own website with a special shop to offer all enthusiastic straw star hobbyists tools and materials - especially craft straw, yarn, laying forms and straw splitters - because it is often difficult to get everything from one source. Since the beginning of 2016 I have been operating this "business branch" together with my now grown daughter under www.strohsterne-bratz.de
In the summer of 2018 I moved to etsy with my straw star shop.