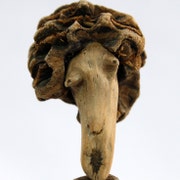 Yalos is taking a short break

Hello Alanya magazine:
By the time a piece of wood is washed ashore on the beach in Alanya, it has probably been through quite a journey already; it fell off a tree somewhere, carried along the way by wind and rain, ended up in a river and taken to the sea. There it has been swung in the waves, grated by sand until it was finally thrown ashore; ready to be found by Christiane Alaettinoğlu and Filiz Ateş from Yalos. They give driftwood like this a new lease of life, this time as an object of art.

“Mother nature is the biggest artist”, explain Christiane Alaettinoğlu and Filiz Ateş. “We only apply the finishing touches”. The pair makes art objects from driftwood that they collect on the beaches of Alanya. Most unusual is that they use the wood in its original state; it doesn’t involve sawing, sanding or any other type of tampering. “We may give it a manicure, or at the most some Botox”, is how Christiane describes it jokingly; “But we never do plastic surgery.”
Filiz adds: “The wood has its own story to tell, we only try to emphasize the shape it has already taken.”
In the Yalos workshop, as the artist’s company is called, one can see what they mean. With the aid of materials such as parchment or stone the wood transforms into a dancer, a sitting figure or someone in a pensive mode; it takes the shape of a boat, a fish or a mirror. Christiane: “We pick up a piece of wood and look at it from different angles; at first I may think it resembles a boat, but maybe soon I’ll see the shape of eyes in it, or a beak. But whatever it becomes in the end, it will have been destined to this all along.”
Filiz is the one who started the driftwood art when she needed a base for her lamp and decided to use some wood she found on the beach; this experience inspired her to continue to use driftwood more often for her artwork. One day she met Christiane who fell in love with her artwork and was keen to start craftwork herself, so they decided to work together. Christiane and Filiz opened their workshop five years ago. They produce their work under the brand name ‘Yalos’. Yalos, the Greek word for coastline, has been adopted by people in Alanya to describe driftwood; there is no Turkish equivalent for driftwood and Christiane and Filiz found that the locals had named it themselves: in Alanya it is called Yallos – with two ‘LL-s’ – and originates from the Greek word Yalos. Driftwood is defined as pieces of wood drifted and washed ashore on the beach or river banks due to currents, waves or tides. The wood may have originated from trees or plants, a ship wreck or wood that has otherwise landed in the water by accident.
The ladies from Yalos collect most of the wood after a big storm. They have to be quick then because locals will also be collecting wood for their wood burners. “The wood we use should not be too soft; sometimes we find bags full, other times it is a lot more difficult.” Some pieces of driftwood are like precious jewels to Christiane and Filiz. They keep them safely stored in boxes, waiting to reveal their true shape and to become the ultimate piece of art. “If we could store these pieces in a locked safe, we would”, says Christiane. “That’s how important to are to us.”
The workshop is filled with creations, but some of them will never get sold; the artists have become too attached to them. “We find it difficult to sell our work anyhow”, Filiz laughs; “And especially if it has been here for a while we just don’t want to part with it.”
In the meantime Yalos art is gaining recognition; last year they won the third prize in a competition to create a portable souvenir, held by the city of Istanbul as part of the Cultural Capital of Europe 2010 festivities. They also participate in festivals and the municipality of Alanya uses Yalos art as PR gifts.

Last updated on May 9, 2022
There is no actual word for "driftwood" in Turkish. The Alanya people have adopted the greek word " ΥΑΛΟΣ -yalos" (coastline ) to mean driftwood.
When we pick up "the beached", as we call them, the artistic work has already been done. Our job is only to put together and to bring out the beauty perfectly created by nature.
We do not change the objects in any way -like carving or cutting- what you see is what we found on the beaches of Alanya.

We do accept paypal for international orders
İt is possible for you to use this option even if you are not registered at Paypal.
Just click the Paypal button when you go through the checkout and look for the link to pay with your credit card!
http://www.etsy.com/storque/how-to/how-to-pay-with-a-credit-card-and-create-a-paypal-account-746/

...we ship via registered turkish mail (PTT), as soon as possible after receiving the payment, in 90% of all cases the same or the next working day in Turkey for ready to ship items.

...this takes normally 7-10 working days to Europe and about 7-14 working days to the US and Canada...everywhere else up 6 weeks
those times are given by experience and may be longer or shorter due to the duration of the custom checking,
the traffic (christmas) and your local post office process...

...please contact us if you received a damaged package,

... we are not responsible for any extra custom costs which could be taken by the custom in your country

Our aim is, to make you feel good with your purchase and we will do anything possible to solve any problem you may have...please contact us...