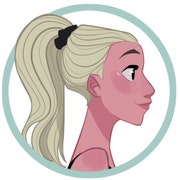 PernilleOrum is taking a short break

Note from shop owner The shop is currently closed while we figure out the new shipping setup.

All purchases of Mermay and Mermay2 will start shipping within the next month.

Sorry for any inconvenience,
/Pernille

The shop is currently closed while we figure out the new shipping setup.

All purchases of Mermay and Mermay2 will start shipping within the next month.

Sorry for any inconvenience,
/Pernille

Pernille Ørum is a danish illustrator and character designer living as a freelancer in Copenhagen, Denmark. She graduated The Animation Workshop in 2011 with a bachelor degree in Character Animation and went on to both Ireland and UK to work as an animator before deciding to move back to Denmark and focus on character design. Pernille has worked with companies such as Nickledeon Jr, Mattel, Dreamworks and Disney publishing and she was the lead character designer on Warner Brother’s ‘DC Superhero Girls’. In 2019 Pernille will have her debut as a comic book artist with Mark Miller’s HitGirl written by the movie director Kevin Smith.