Loading
Local taxes included (where applicable), plus shipping
Translated by Microsoft
See in original language
Translate to English
Sorry, we could not translate this listing to English.

A limited edition of the film "Itinerries #0". This DVD album has a special design and customizable content, like an old photo album; includes a printed pictures collection (twelve) taken from some frames of the film, and that pictures can be changed to create different stories, different meanings, and different synopsis.

"Itinerarios" (Itineraries) is an audiovisual project by artist Ernesto Sarasa (Fonostr.b.), as a compilation of his sound productions and visual works which he has made over several years. Includes animation and video-collage pieces of human and biologic scenes and events which question about time, society and nature. His sound work consists of field recordings, urban and natural soundscapes, and manipulated samplers.

Also "Itinerarios" is an audiovisual performance or live cinema, in which Ernesto Sarasa assembles a cinematographic work through the sound texture that he plays live. A software program designed using Pure Data, allows him to inter-relate the audio and video material with total indeterminacy and open to chance. Thus, every performance creates an unpredictable and different film according to the individual perception of each spectator.

A limited edition of the film "Itineraries #0". A special design album and customizable content, such as an old photo album; includes a collection of printed (twelve) images drawn from frames from the movie, images that can be changed to create various stories, meanings, and synopsis.

Itinerarios is an audiovisual project created by the artist Ernesto Sarasa (Fonostr.b.), as a compilation of his sound and visual work, made over several years. Composed of pieces of animation and video collages of human and biological scenes, events that reflect on time, society and nature. His sound work consists of environmental recordings, urban and natural soundscapes, and manipulated sounds.

"Itinerarios" is also a live audiovisual, in which Ernesto Sarasa composes a live cinematic work, depending on the texture of the sound he performs live. A program designed with Pure Data, allows you to assemble audio and video in real time with random intervention and total indeterminacy. In this way, each performance generates a different and unpredictable film, open to the individual perception of each viewer. 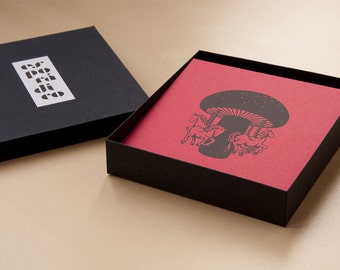 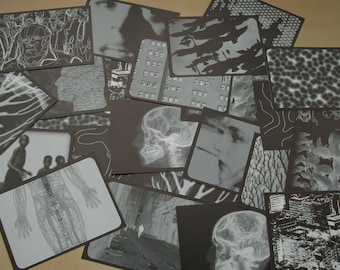