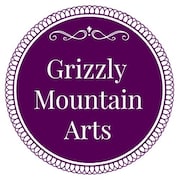 Announcement    Grizzly Mountain Arts creates one-of-a-kind collectible fiber art tools and artisan jewelry. Please be sure to scroll down to view all of the items currently for sale. Thanks for stopping by!

Grizzly Mountain Arts creates one-of-a-kind collectible fiber art tools and artisan jewelry. Please be sure to scroll down to view all of the items currently for sale. Thanks for stopping by!

Dave took up the whaler's art of scrimshaw while aboard ship during the Viet Nam War. He has a degree in wildlife ecology and worked over 25 years in the U.S. Fish and Wildlife Service as a wildlife law enforcement officer and wildlife refuge manager of some of the largest refuges in the United States. While Dave doesn't scrimshaw much these days due to a neck problem, he does incorporate bone and antler into many of his fiber art tools.

After his retirement in 2002, Dave was introduced to tatting shuttles by a customer at an art show he and Jo were doing on the Oregon coast. It wasn't long before he became well known on Ebay for not only his handcrafted tatting shuttles, but also his lace making tools, crochet hooks and spindles. Dave now sells his fiber art tools exclusively on Etsy.com and has satisfied customers all over the world.

Jo has been married to Dave for 38 years. While a musician by training, she enjoys working with earthenware clay, pine needles and ancient ivory. Jo previously sold her ceramic jewelry on Etsy under the name of "Good Dirt Jewelry". Jo also does all of the photography for Grizzly Mountain Arts.

Jo and Dave work together to create all of the fiber art tools and other items sold in their Etsy shop.

Last updated on May 9, 2022
Thank you for visiting Grizzly Mountain Arts Etsy shop! There are two of us here (Dave and Jo), so you'll usually find a wide selection of items ranging from fiber art tools, alcohol ink and ceramic jewelry.

We welcome convos and emails, so please feel free to contact us with any questions you may have about our items, shipping or just to say "Hi!"

Grizzly Mountain Arts expects payment via PayPal or Direct Checkout at the time of purchase.

Grizzly Mountain Arts ships items on Tuesday or Friday. We require a first and last name, or business name in order to ship an item. All items are shipped 1st class mail with delivery confirmation. Due to an increasing number of lost packages, we regretfully no longer ship internationally.

If you would like to add insurance to your item, please convo or email us with this information.


Once we have shipped your item, we cannot be held responsible for slow shipping times or delays. It has been our experience that some packages can take up to 60 days to arrive at their destination. A full refund will be issued if your package does not arrive after 60 days.

At this time, Grizzly Mountain Arts does not sell wholesale or by consignment.