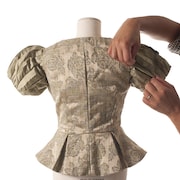 Announcement    Welcome to the Etsy boutique for Rastaquouère! High end, one-off, handcrafted children's garments made up in lush and unconventional fabrics.

Welcome to the Etsy boutique for Rastaquouère! High end, one-off, handcrafted children's garments made up in lush and unconventional fabrics.

WHAT'S IN A WORD?

“Rastaquouère” is a 19th century French word with a pejorative connotation coined to describe exotic looking individuals, usually strangers, who unapologetically exhibited their wealth and colourful clothing. The rich and satisfying phonetic soundscape of the word and the will to reclaim and reinvent a term so steeped in eurocentric othering seemed a match for my marginal, slow, deliberate and homemade practice at odds with current Fashion paradigms.

As obvious as it may seem, clothes are first and foremost about fabric. Fabric that speaks in volumes or skims the body, fabric that is flamboyant or chaste. But it must be sought out, seized, coaxed into obedience, quarantined lengthily in closets, boxes and on tabletops, thought upon, dreamed about, understood and mostly loved before it is ready to become a garment. This requires time, patience, research and yes, most dreadful of all things Marxist and menial, capital. Prices reflect time, thought and imagination spent, precious and rare materials sourced worldwide and all of those many ephemeral and undefinable things that walk off into the creative process and that can’t readily be appraised. Every stitch represents growth and experience in progress.

Natural fibers, notions and threads both new and re-appropriated are privileged as much as possible in a bid for clothing that leaves a more optimistic imprint, that feels real and is most akin to a slow-brewed, bona fide artisanal process. The sourcing of rare, often vintage dead stock fabric ensures exclusivity and authenticity in reviving handcrafting and bygone techniques in fabric creation.

Although the utmost care is taken during the cutting process to keep fabric waste to a bare minimum, traditional dressmaking produces a certain amount of cutting waste. Here, fabric remnants that ended up on the cutting room floor as a by-product of my dressmaking activities (including Lanvin silks, Givenchy brocades, French linens, American denims and Italian cashmeres and chambray) have been upcycled into the handmade production of art dolls and stuffed toys.

The dolls themselves are made from GOTS (Global Organic Textile Standard) certified organic cotton muslin and stuffed with USA grown and milled organic cotton fiber. Organic cotton fiber processing is much kinder to the planet, to the fibers and workers involved than conventional processing methods – much of the wastewater is recycled, and bleach and harsh chemicals have no part in the scouring process. As such, it is perfectly normal and healthy to find some dry plant matter tangled in the stuffing. Doll hair is made from soft, organic mohair wool hand dyed with natural pigments (onion skins, walnut hulls, madder root).

Every doll and toy is a unique one-off and has been handmade with love in Canada. Each is brimming with its very own personality!

Although the dolls are predominantly meant for decoration they can withstand some light play. Do not dry clean or put into the washing machine or dryer. Spot cleaning with a damp soft sponge and mild soap is preferable should soiling occur. As some dolls feature small decorative elements they are unsuitable for children under 3 years of age.


WHO'S THE GIRL BEHIND THE WORD?

Marie-Michelle Melotte was born and raised at the foot of the Canadian Rockies in Calgary, Alberta. She stopped believing in Santa at the age of ten and subsequently but not necessarily consequently, chose, in spite of common sense, to do a B.A. in Humanities, majoring in French lit with minors in Spanish and Drama. After having lived in Cyprus and France, published and unpublished satirical short stories in tow, freelancing as a translator and sporadically working in theatre, she sat down in front of a Singer almost twice her age and started sewing, thus fulfilling a lifelong ache for the joys of fabric manipulation. A dressmaker, embroideress and eco-conscious textile enthusiast, she signs her creations under the name Rastaquouère. She enjoys biting social satire, theatre, art in general and in particular, books, the absurd, prolepses, Simone, Audre, Ducharme, Perec, Queneau, independent film, Nina Simone, Tom Waits, Supergrass, the Pink Floyd and other geezers of rock, headstrong women and status quo slayers, the molecular properties of cotton candy, her beloved banjo, dancing autumn leaves, the crunch of snow, endless prairie plains, ghost towns, seaside stone houses, cashmere sweaters, snapdragons, rhododendrons and peonies, vegetable gardens, the crumbling of puff pastry, the precarious stiffness verging on pendulous mess of whipped cream, old hats, sealed and handwritten letters, bourbon, pick me up cocktails and end of the day herbal remedies, comic opera subterfuge, stylistic exercises and enumerations…

Due to the artisanal nature of production and the rarity of the materials sourced, all transactions are final and will neither be reimbursed nor eligible for exchange.

Exceptions can be made in the improbable case of grossly misrepresented merchandise. The case arising, complaints will be examined on an individual basis. These must be addressed to the seller within 7 days of receipt. No complaint arising after this 7 day delay will be considered. Reimbursements in these improbable cases, minus original shipping and Etsy fees will be made only if the unworn and unaltered item is returned via a reliable, trackable shipping method in mint condition and in its original packaging. The customer is responsible for return shipping fees.

All transactions are final and will neither be reimbursed nor eligible for exchange. Exceptions can be made in the improbable case of grossly misrepresented merchandise. The case arising, complaints will be examined on an individual basis. The artisanal nature of production prevailing, any irregularities cannot be considered a defect but attest to the authenticity and uniqueness of the item. No responsibility will be taken for any damage occurring after an item has been received. The purchase of items from this store indicates the automatic adhesion of the buyer to store policy.

The garments presented on the website are available for purchase in the sizes indicated and remain in stock until they are sold out.

Orders will be shipped within the three business days following successful receipt of payment. Orders ship from Canada by Canadian postal services.

Any duty, importation fees or taxes are the buyer’s sole and entire responsibility.

If your country doesn't appear in the listed shipping destinations, please don't hesitate to send a message for a personal shipping quote.

Sizing is based on standard European sizes.

Please ask all necessary questions prior to purchase.

All items are handcrafted in Canada and/or France in animal and smoke free environments.

New items will be added to the store as production allows.