All books will be signed by the author on the title page, unless requested otherwise. If you would like the book(s) signed to an individual, please provide the name and correct spelling.

Autographed six-book set of the novels of the Star Rigger Universe, by Jeffrey A. Carver. These are new trade paperbacks from Starstream Publications, signed and personalized (if requested) by the author. The books span much of Carver's career and were previously released by a variety of publishers. The complete series to date, from a Nebula-nominated author and recipient of the Helicon Awards' Frank Herbert Lifetime Achievement Award for science fiction writing.

Special pricing is less than the combined cover prices of the six books, and includes free shipping.

Panglor - Discredited as a space pilot, Panglor Balef is doomed to die in space. Bad enough to be coerced into a mission of murder and suicide, he must also contend with a young woman—stowaway and impossible companion. He could never imagine the journey through space-time they are about to take, from which there is almost certainly no return. Prequel to the universe of starship rigging. Originally from Dell Books, revised edition by Tor Books. This edition is based on the revised Tor edition.

Dragons in the Stars - Dragons in space? A preposterous legend. But when star pilot Jael defies an abusive ship’s master and rigs “the mountain route” through the Flux, the dragons indeed appear—and challenge her to duel. If she escapes, she would be wise never to return. But the currents of the Flux are fickle. When fate steers her this way again, she must defend her former foe against a darkness that seeks his death. Originally published by Tor Books.

Dragon Rigger - A realm at war. The star dragons struggle under the oppression of a terrible power, one that’s intent upon twisting spacetime itself into a web of subjugation and death. According to prophecy One will come from outside to challenge the darkness. Star pilot Jael may be that One. But if the prophecy is true, the price of victory over the darkness will be Jael’s own life. Originally published by Tor Books. (Tor first-edition hardcover available separately.)

Star Rigger's Way - His shipmates dead, star rigger Gev Carlyle is adrift in the Flux between the stars. His sole hope for survival is an alien castaway named Cephean. Only a compatible rigger team, meshed in psychic unity, can harness the turbulence of the Flux—and Carlyle's ship is sailing inexorably toward the deadly maelstrom of the Hurricane Flume. He needs Cephean's help, but dreads the union more than death! Originally published by Dell Books.

Eternity's End - The Flying Dutchman of the stars! Rigger and star pilot Renwald Legroeder undertakes a search for the legendary ghost ship Impris—and her passengers and crew—whose fate is entwined with interstellar piracy, quantum defects in space-time, galactic coverup conspiracies, and deep-cyber romance. Can Legroeder and his Narseil crewmates find the lost ship in time to prevent a disastrous interstellar war? An epic-scale novel of the Star Rigger Universe--and a finalist for the Nebula Award, from the author of The Chaos Chronicles. Originally published by Tor Books. (Tor first-edition hardcover available separately.)

Seas of Ernathe - Starship rigging is a long-lost art. But the ocean world Ernathe may hold the key to its rediscovery, if a young star pilot can learn the ways of the mysterious sea people, the Nale’nid. A touching story of love and personal discovery, Seas of Ernathe takes us on a journey back toward the mode of star travel that once knit the galaxy together. Carver's debut novel, originally from Laser Books.

A SAMPLE OF PRAISE FOR THE STAR RIGGER NOVELS:

“An original and very charming novel, with a particularly unusual protagonist.” —Publishers Weekly

“Jeffrey Carver imagines wonders and allows us to share his vision.” —Terry Carr

“True love, cognitive dissonance, divisions among the enemy, ambitious schemes, another mission—this one deeper than anyone has ever gone before into the substrata of the Flux—and a final resolution that leaves the reader both breathless and satisfied.” —Analog

“A mesmerizing tale of human perseverance and courage under pressure that updates the legend of the Flying Dutchman.” —Library Journal

“Carver never runs out of new plot twists to keep the reader coming back for more.” —The Washington Post

After you place your order, StarRiggerBooks will take 1-3 business days to prepare it for shipment.

StarRiggerBooks puts your order in the mail.

Estimated to arrive at your doorstep Feb 4-7!

Message Jeffrey A.
StarRiggerBooks made this item with help from

Fantastic series! Some of the best sci-fi out there! The book quality is solid, and the cover art is mesmerizing! I also really enjoyed the audio book versions as well. I am very happy with the personalization, Thank You Jeffrey A. Carver! You should do yourself a favor and pick these up!

Autographed Set of THE CHAOS CHRONICLES, by Jeffrey A. Carver

My book was in absolute perfect condition! It was packed/shipped very well and arrived faster than estimated. This was my first purchase ever on Etsy and StarRiggerBooks exceeded all of my expectations. Thank you so much!

Perfect condition, shipped quickly & carefully, with the inclusion of a few extra free, very much appreciated,tchotchkes. 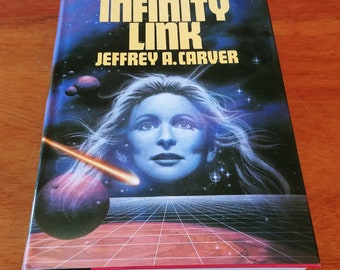 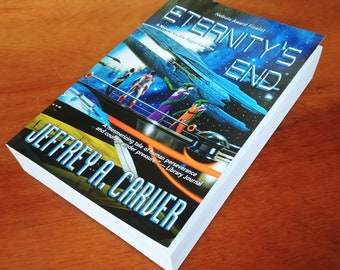 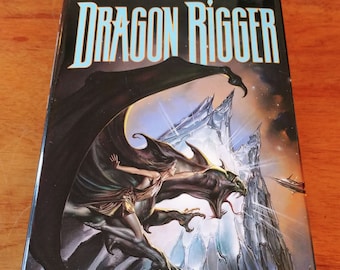 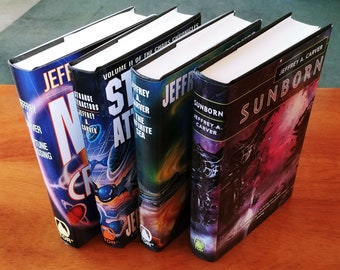 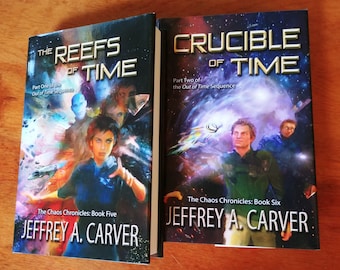 Autographed Hardcovers - The Reefs of Time / Crucible of Time - by Jeffrey A. Carver 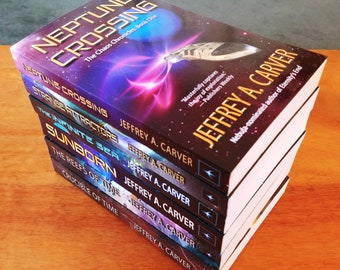 Autographed Set of THE CHAOS CHRONICLES, by Jeffrey A. Carver