Please enter name or monogram exactly how you'd like it sewn. Monograms are traditionally first, LAST, middle. Note any special directions in the notes to seller box upon checkout.

Made in the USA! One of our favorite gifts to give! This classic cable knit sweater zips up the back, which makes getting your baby in and out so much easier. Choose from baby blue, pink, or ivory sweater colors in sizes from 3 months all the way up to 24 months.

At checkout, in the notes to seller area, please tell us:

After you place your order, TheInitialDesignSTL will take 1-2 weeks to prepare it for shipment.

TheInitialDesignSTL puts your order in the mail.

Estimated to arrive at your doorstep Nov 9-18!

Enter your personalization information in the "Notes to Seller" area at checkout. Please make sure Initials are in the order you want them sewn. Monograms should be listed in first, LAST, middle order.

Please carefully proofread the names, dates, and other details you provide.

The Initial Design features a wide variety of fonts, monograms, and colors to choose from. Take a look at all your options here:
http://www.theinitialdesignstl.com/custom-monograms

If you need large orders or custom digitizing and embroidery for bridal parties, sports teams, school functions, or corporate gifting, we can help. Contact us today.

For a Traditional Monogram, the middle letter (the family name) is LARGER and in the center. It is flanked by two smaller letters representing the first name on the left and either the middle or maiden name on the right.

For a Couple’s Monogram (when the bride takes the groom’s last name), the monogram is the Bride’s First Name, Common Last Name, Groom’s First Name. (Example: George + Mary Smith would be MSG.)

The traditional personalization for a man are his horizontal initials, also known as a Block Monogram. Each letter is the same height and appears in the same order as the actual name – first name, middle name, last name. Example: George Henry Smith would be GHS.

Always enter your initials in the order you would like them stitched.

This sweater is adorable! I had a zip up the back sweater for my baby many years ago. They are brilliant....don't understand why they are impossible to find! The embroidery is lovely. Perfect gift for my new grandson!

Absolutely beautiful!!! I will be ordering more!!!

The sweater was a gift and it arrived wrapped in a nice bag already for gifting. It is a darling sweater and my new go to baby gift

The sweater shipped in great time and they absolutely loved it! Thank you!! 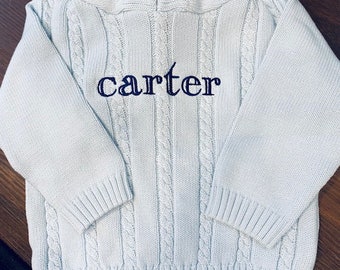 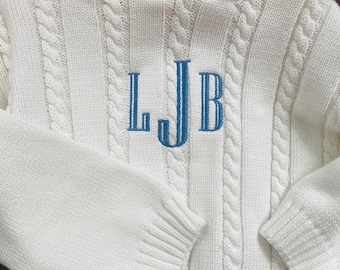 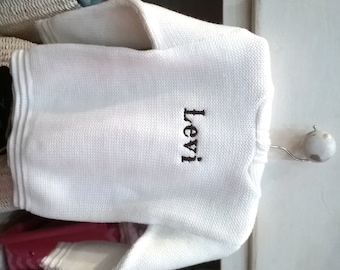 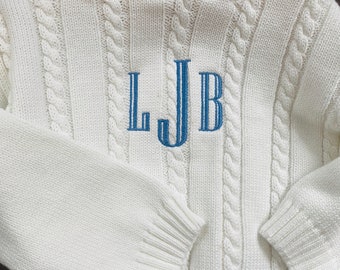 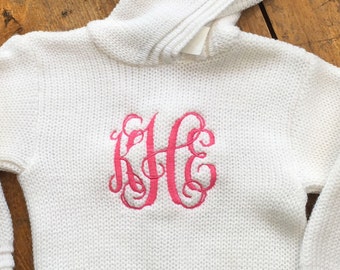 Request a cancellation within: 4 hours of purchase