‘Olokun of the Galaxy’ is Esther Iverem's original book of poetry and visual arts that tells the story of an African spirit of the deepest ocean. Olokun is born when Earth’s oceans are born, s/he witnesses the Atlantic Slave Trade, industrial revolution, pollution of the planet’s water and, finally, s/he takes off into space to swim on other planets and moons of the Galaxy where there is water or liquid. Iverem developed this hardcover, beautiful book, suitable for older children to the oldest adults, to accompany a series of award-winning Olokun figures she creates from jeans and other reclaimed materials. She has exhibited these “pants dolls” across the United States since 2012, sold them at pop-up shops and online on the website for her studio and through the studio shop on Etsy. Honoring indigenous water protectors and the Movement for Black Lives, some of these “pants dolls” wear medallions that read “Water is Life” and “Mni Wicomi” or carry small photos of African Americans such as Eric Garner or Miriam Carey killed by state violence. This series and book takes Olokun from this earthly home to other oceans in the universe—including the waters beneath the ice of Europa, the methane lakes of Titan and the far-off star system of Sirius. Olokun is an ancient and medaled hero and heroine, both matriarch and patriarch, a conduit for embrace, safety and regeneration. S/he is also protector of humanity, urging us to save and conserve our water, which is life. Water is Life! Black Lives Matter!

“Esther Iverem’s Olokun of the Galaxy is a creation myth for an earth abused by slavery, capital, greed, human waste, excess and the neglect of nature in favor of concrete and death. Iverem, as djeli, links our global climate crisis to the Black Holocaust. She gifts us an epic for the ages that rages through syncopated lines with syntax swimming and singing through our synapses, giving us hope in the midst of the abyss.”
—Tony Medina, author of I Am Alfonso Jones


"Olokun of the Galaxy, by poet and artist Esther Iverem, is a richly imagined work drawn from the West African Yoruba tradition that offers a way to comprehend what is broken and breaking around us—while also conjuring hope, meaning and significance. Grounded in history and culture, this is storytelling that reminds us that what we do matters. The vision within Iverem’s book is urgent as we humans struggle to re/learn how to respect the natural world and how to continue to live within its grace.”
—Melissa Tuckey, editor, Ghost Fishing: An Eco-Justice Poetry Anthology


Esther Iverem is a multi-disciplinary author, artist, producer and curator. She has received numerous honors for her diverse body of work, which includes a news show on Pacifica Radio, two digital media projects and several visual art exhibits. She is creator of an award-winning series of contemporary African spirit figures, on which the book Olokun of the Galaxy is based. Before working as an independent writer and artist, she was a staff writer for The Washington Post, New York Newsday and The New York Times. Her previous books include a book on film, We Gotta Have It: Twenty Years of Seeing Black at the Movies, 1986-2006 (Hatchette Book Group) and two books of poems, Living in Babylon and The Time: Portrait of a Journey Home (Africa World Press). She is a native of Philadelphia, a graduate of the University of Southern California and Columbia University. She lives in Washington, DC. www.estheriverem.net

After you place your order, LegacyQuiltsAndArt will take 1-2 business days to prepare it for shipment.

LegacyQuiltsAndArt puts your order in the mail.

Estimated to arrive at your doorstep Sep 30-Oct 1!

Message
LegacyQuiltsAndArt made this item with help from

Printed and distributed in the U.S. by Ingram Spark, Nashville, TN

The book is very imaginative. It inspires curiosity about the planets and the water they contain. I would like to see more from Olokun of the Galaxy!

Thank you!! The book is a beautiful piece

The "Europa Family" is a unique piece of art I like!!. Much more 3-dimensional than I expected, All hair e.g. is made by single parts, maybe beltholders. The eyes are most simple the original buttons what makes it more surprising that both family members seem to look at you. I don't know to which part of the book this artwork belongs: they look like beeings that had to go to that new place they are and have to make the best out of it. It wasn't the wish to explore, maybe the force of former circumstances brought them there. The taller one looks like carrying heavy bourdons but pulling him- or herself together for the next "fight" for a better future and showing strenght to the new world and for the smaller one. Created by Jeans softens and gives a warm expression. It's art that doesn't put up a distance.

Europa Family No.2, Olokun of the Galaxy Series

I love this artist and her work! It’s inspiring and cute with a real message. 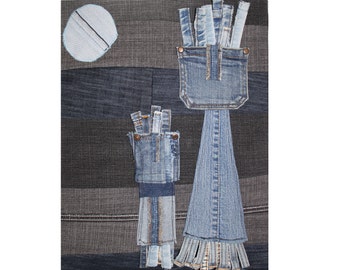 Europa Family No.1, Olokun of the Galaxy Series 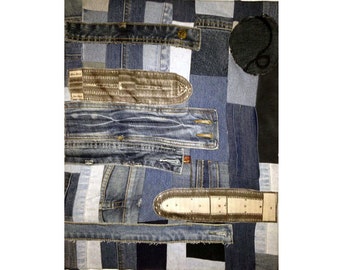 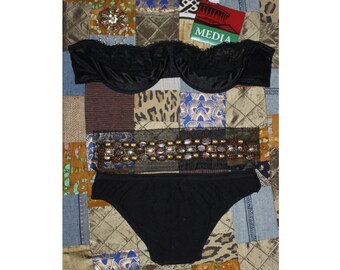 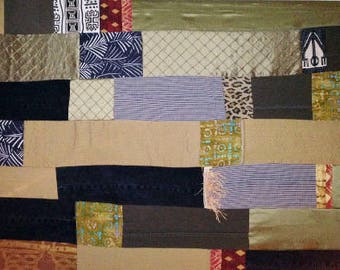 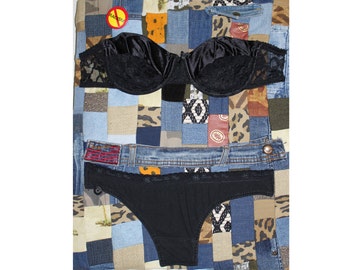 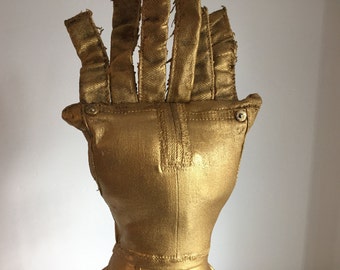