This is Flannery O'Connor. She was a Gothic, southern writer and a devout Catholic. She lived in Milledgeville, GA on a farm with her mother and liked to raise exotic birds, most famously, peacocks.
She had Lupus, which kept her in pain and on crutches and she died at the age of 39.
Most people, when asked which of her stories is there favorite will say, A Good Man is Hard to Find. I've only read Wise Blood, which horrified me. Then I read the Sparks notes and it made it much better knowing all the hidden meaning. But I haven't been brave enough to read her other stuff.
A friend sent me an article that got me reading about her a little bit and getting to know her inspired a painting.
So here she is in Black, to symbolize the Gothic. She holds a fountain pen and a mega phone. The pen illustrates her profession and the megaphone illustrates an answer she gave when she was asked why her writing was so unnerving. 'In the land of the deaf, you have to shout.'
Everybody, myself included, paints her with peacocks. Who wouldn't? They're beautiful.
However, for her self portrait, she chose, instead, a pheasant, which just made me love her all the more. So I stuck one in there, peeking over her shoulder.

Estimated to arrive at your doorstep Dec 5-14!

Sent to friend & he loves it. We are both big Flannery fans & he grew up in her region of GA. Was really happy to find such a unique gift to send to him.

I love these Rosary mysteries cards!! And the book that cane with it was a pleasant surprise! Thank you so much for the beautiful pictures and for the good laughs! It is a refreshing approach to meditating on the Mysteries. Highly recommend! 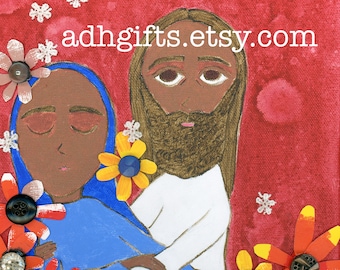 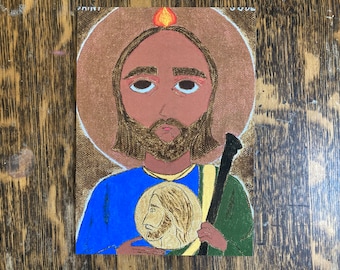 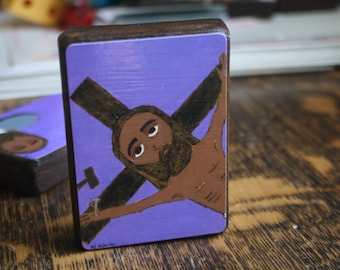 2.5" X 3.5" Jesus is Nailed to the Cross Byzantine Folk style icon on wood by DL Sayles 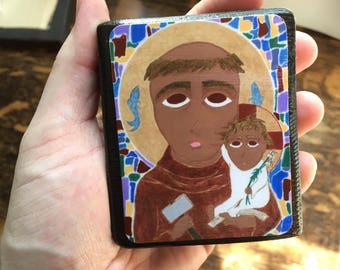 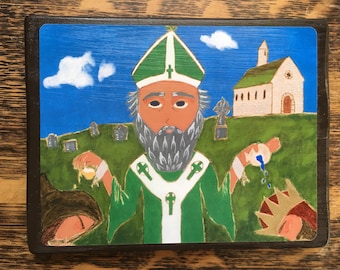 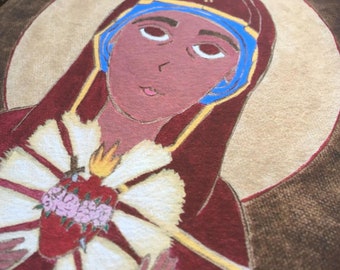