Kailā Devī is a popular goddess in the eastern Rajasthan state of India, renowned for granting miracles and intervening in daily life when evil starts to get the upper hand.

This illustration by Laura Santi features her with her sister, the goddess Cāmuṇḍā, who likely existed in the area before Kailā Devī herself arrived. Indeed, according to the story translated in this chapter, the stone image of Kailā Devī was brought to its present location from another region, many centuries ago. In the image below, as in the icons at the temple itself, Kailā Devī inclines away from her sister slightly. People say this is because of her disapproval of Cāmuṇḍā’s dietary preference for meat (Kailā Devī herself is strictly vegetarian). Despite this small tension in their relationship, the two goddesses are worshiped together, and generally regarded as different aspects of the singular Divine Mother.

This image is one of 12 illustrations for a book entitled "A Garland of Forgotten Goddesses", by Michael Slouber. The chapter on Kaila Devi is written and translated by R. Jeremy Saul.

Here is an excerpt of one of the stories about the goddess:
" 'One day, Mother was playing dice with Kedargiri, as she was fond of doing, when suddenly the dice fell from her hand and she became very still. After some time, she returned to her normal state and started playing again. At first it seemed to Baba that nothing had happened and all was normal, but suddenly he noticed water dripping from Mother’s hair. He asked in surprise, “Mother, what is happening? There is water dripping from your hair!” Mother said, “It is nothing, Baba. Just play. What are you getting at with these words?” But the baba could not forget this matter, instead thinking to himself, “Mother will surely explain this to me.” Mother then said, “Baba, I am telling you, you will not be able to see me in this form a second time.” And she added, “Look Baba, you can see I have various devotees like you, and from time to time I come to help and protect them. Today, one devotee of mine had brought his goods by boat in the Yamuna River, but the boat got stuck in a whirlpool. In this time of trouble, that merchant devotee remembered me, so I went there to assist him. I saved him from the whirlpool, and that is why my hair is full of water from the Yamuna. Baba, don’t be wondering how I could go so far from here and how I could rescue that boat. For me, this is all easy work. I am present in all places, and in accordance with what I said above, I will henceforth not be visible to you in this form.” Having said this, the goddess disappeared!'
It is said that this happened in 1428 CE.

I don't paint in standard frame sizes, so the print sizes are also not in standard sizes, but approximately the measurements that each listing is for. This is true for all except the $17 cropped versions of my art that are listed at 5" x 7", and a few of the prints that are available only in one small size, because their originals were very small paintings.

I only accept returns on prints that are defective or damaged in transit.

Oh my Goddess... this is ABSOLUTELY BEAUTIFUL! I loved it when I bought it but I had NO idea how gorgeous it was going to be in person! It’s so beautifully saturated it’s just lovely. I am so happy with this print!!!! Thank you!!!! ❤️

This is incredibly beautiful. I bought the 5x7 fir my shrine. I have been doing Dakini practices, in particular Yeshe Tsogyal, and this image is magical. I don’t know how else to explain it but I’m very drawn to it. Thank you Laura.

Absolutely gorgeous! Bought 2 and I am buying 1 more. The product is so beautiful. Thank you. 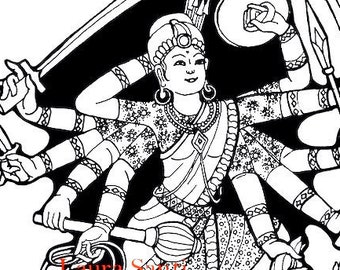 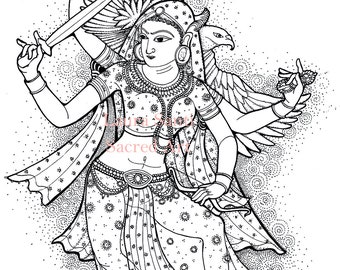 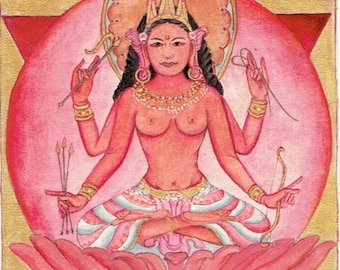 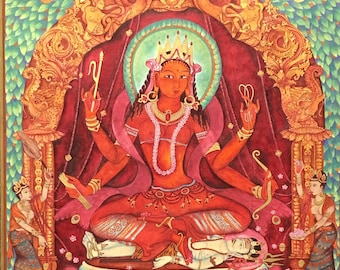 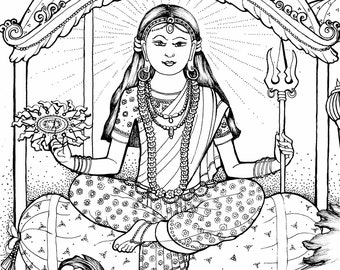 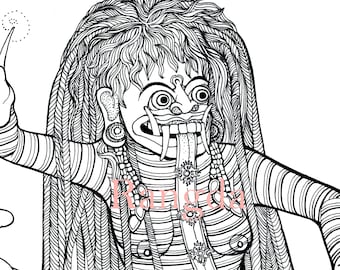