*Floating Frames
A contemporary and unique choice. A 1.5" Museum-Grade Canvas Gallery Wrap is inset, leaving a 3/8" space
between canvas and frame. *Please indicate color of Frame: Walnut, Black or Gold.

*Rolled Canvas
A Museum-Grade Canvas that is a performance leader in color gamut, and print permanence. Listed size is the face
of the canvas, we add room for the wrap edge as well as 2" for stretching.

“Saint Joseph and the young Jesus in the Basilica of Sant'Antonino Sorrento - Painting by Dino Carbetta”…
Legend has it that in the sixth century, a boy was playing on the beaches of Sorrento when suddenly, a sea creature appeared through the waves, swallowing him whole. Horrified, his mother ran to the local monastery, where she begged the abbot to save her child’s life. Remarkably, the abbot was able to bring the child back from the shadow of death, virtually unharmed. This is one of the many miracles attributed to Sorrento’s patron saint, San Antonino. La Basilica di San Antonino is one of the oldest Catholic churches in Sorrento. Built during the Baroque period, its influence shines throughout the church. Different colors of marble create a colorful display around the frescoes depicting the miracles attributed to the Saint’s life. Perhaps the most breathtaking part of the church is the crypt, directly below the altar. With white as its primary color, an angelic essence feels palpable between the walls. Small sculptures of cherubs line the two halls leading to the crypt. San Antonino was buried between the walls. In the middle of the crypt is a statue of San Antonino, its craft making it seem as if the Saint is living. One of my great memories, as I meandered about the rather large crypt in the silent church, looking through the altar to the front doors, opened…an elderly Italian man entered slowly toward the crypt. He nodded his head toward me and moved in front of the eternal candle and relics of San Antonino. He silently put his hand upon them and bowed his head in prayer as if he had done this every day of his life. Moved by his devotion and reverence, as he nodded in his exit…I imitated his every movement and prayed to this patron saint of Sorrento. This was one of my first stops on the Amalfi coast, and after two visits to the Bellissimo Sorrentino coast, I always feel like I am comfortable and spiritual at home.

After you place your order, DinoCarbetta will take 2-3 weeks to prepare it for shipment.

DinoCarbetta puts your order in the mail.

Estimated to arrive at your doorstep Jul 14-30!

Dino outdid himself once again! This is my most favorite recent work of sacred art that Mr. Carbetta has meticulously put together for me. The two covenant pierced hearts 💘💘 of Mary and Jesús. Perfect for private contemplative prayer and or the Rosary. Especially the sorrowful mysteries. (I highly recommend the Sorrowful Mysteries of Our Lady of Kebeho). Immaculee’ Ilibagiza from the Rowanda Genocide showed me this rosary. So very deep and powerful. Goes perfect with this image! I ended-up purchasing two of these beautiful, mystical pictures, thanks to Dino’s discounted offer! The second image is a gift for (Mother Adela), Superior Nun of “The Servant Sisters of the Pierced Hearts of Mary and Jesus. So appropriate for them. A big Thanks to Dino for his sacred art mastery and great customer service!

Dear Dino, Thanks for the beautiful picture I received yesterday. The Holy Spirit looks so real and I am so delighted he has come to live in our house. You are a great Artist and I thank God for your talent. May God bless you. Dawn Juliet Santhiapillai. 🙏💙🙏

It shipped on time! I sent it as a gift and they absolutely loved it. Thank you so much

Beautiful item. Brings back such memories. 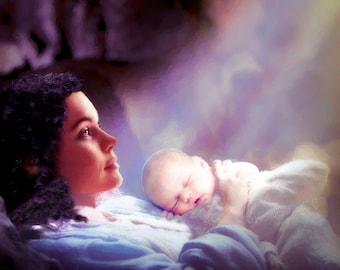 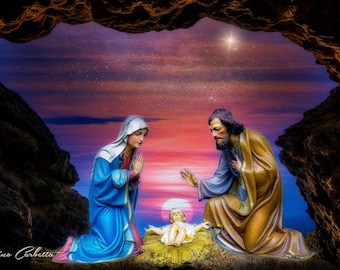 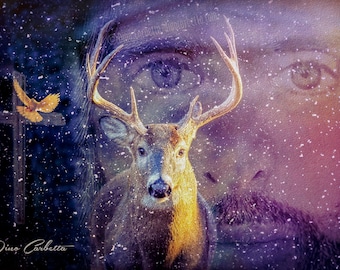 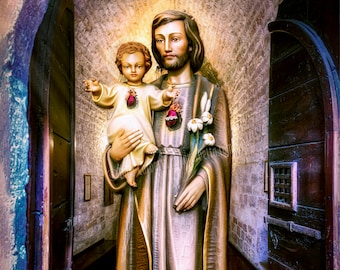 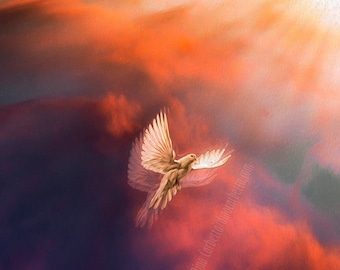 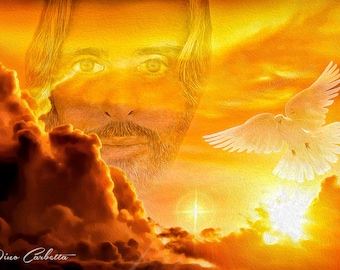