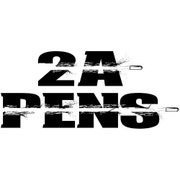 2aPens is taking a short break

Note from shop owner You all cleared us out and currently working on some new projects. You can send messages via Etsy messaging or through our Instagram at @2aPens. Thank you and hope to see you back here shortly!

You all cleared us out and currently working on some new projects. You can send messages via Etsy messaging or through our Instagram at @2aPens. Thank you and hope to see you back here shortly!

Getting Started:
The start of my shop came from needing to make a handle for a tool I was making. I wanted to make this handle unique to me so I found myself at a exotic wood store and I found a want for a wood lathe.

A short time later a wood lathe found its way home along with some pen blanks and parts to make a pen... it was all fun from there. I have found that I love the way each material is a waiting game. You never know what the end result is until you are complete.

Finding this hobby became quite expensive so I started an Etsy store where I can share my creations with others and I am able to put ALL of my funds back into new materials to make more pens (in it for fun and not a business).


How me and Magicians are very much alike:
Ask any magician what his favorite part of doing magic tricks and they will tell you "I love to see the faces and reactions of people when I finish a trick" and I will tell you the same thing when I hand someone a pen I made. Faces light right up, they smile, and I receive some of the most amazing compliments. That is my favorite reward of all.

Influences:
I absolutely love Bob Ross and Fred Rogers, they are unique and loved doing what they did. Bob Ross loved to take a blank canvas and turn it into something that will just amaze any human and Mr Rogers was able to take ordinary things and turn them into fun.
I don't want to forget the man at the wood store the day I was buying my lathe. I unfortunately can't remember his name but he brought the pens he made into the store to show me the possibilities and they were beautiful and I wanted to recreate that.

Recent Changes:
I originally started my Etsy store name as Turned Knotty Exotic Pens but I found it was quite the tongue twister. I liked the name Turned as I turned things on a lathe and Knotty as wood sometimes has knots in it but it just wasn't catchy enough for me. I had been using the name for 5 years and wanted a short, fast and impactful name. People had been just amazed at the bullet pens I had been making as well as the pens that replicate bullets. Something short and sweet came to me, 2A. 2a represents bullets, guns, hunting, outdoors, conservation, living, family, good times, camping, and active lifestyles. I was nervous as I felt people were going to take a political side and I would be blackballed from buyers from using such a name. I took that chance and it was more accepted than the Turned Knotty name was... EVERYONE LOVED IT and nobody in my circle ever took a political side or anything as such. Being the creative person I am, I created an impactful logo that stood out; something that I had trouble doing with the old name. With that, 2018 was probably the biggest change I have made to this store.

One other thing I was feeling needed a slight change was not only having an impactful logo and name, when people opened the envelope I wanted just a bit more of impact and suspense just before the reveal (like magicians). I was originally just putting my pens in an velvet pouch, sliding it in a small bag and then into an envelope and sending it off. When people opened the envelope they found a pen in a bag... it was an amazing pen but it was in a bag. I decided that my pens will now come in a black gift box so it can not only be easily wrapped but it was one more step to the reveal of their new writing utensil. I handed a friend her new pen just after I started doing this and she said "Wow thats amazing" and she hadn't even pulled the pen out of the velvet pouch yet. The impact and suspense just before the reveal matched what I was aiming for.

Last updated on January 23, 2023
Aside from the bullet pens, all of my items are 'What You See Is What You Get' as I do not mass produce my designs nor do I have any "made to order" items. I try and take pictures to allow you to get the best interpretation as to what you will be purchasing.

My bullet pen tarnished, what can I use to polish it.

Most people prefer the tarnished look but if you want to polish it, I personally prefer Cape Cod Polishing Cloths or Maas Metal Polish. Neither one are strong smelling. Try to keep the polish off of the colored parts (copper, gunmetal, etc) as those are coated to protect the finish.

How do I replace the ink cartridge?

Real bullet pens: Pull the 2 halves apart (they are tight but they pull apart, try to not twist while pulling) and you can turn the threaded ink cartridge out and replace it with a standard Cross Refill.

- Roller Ball Pens: Remove the cap from the pen turn the 'nib' (the part where the ink cartridge pokes out) and the ink cartridge and spring should come right out. Don't lose the spring as the replacement may not come with an extra.

If your pen isn't mentioned here please send me a message and I will gladly help.

All pens come in a small black 8" x 2" gift box ready to wrap. If you select "send as gift" we just don’t include an invoice, stickers or business cards and include your gift message in the box. Its all ready to go and ready to be wrapped. If you still want the 2aPens sticker and you selected “send as gift” please let me know in notes to seller on checkout.

We don't do wrapping at this time but this will be added as a feature in the real near future.

My Bullet Pen Has Marks and Small Dents

I up-cycle range fired and military fired brass to create my bullet pens. Most of them if not all of them have some type of marking showing such use. I believe, so do others, that is adds a character to them that represents what is is and its past. I do bring some of the smaller scratches out in the polishing process. Enjoy the pen as it is, it tells a story.

I have added some listings using new brass from Lapua and Starline that have almost perfect brass. I do recommend the military fired brass pens, they have come nice character.