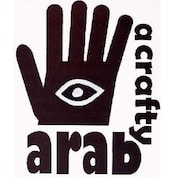 ACraftyArab is taking a short break

Koloud 'Kay' Tarapolsi is a Libyan American artist who creates to promote a positive image of Arab culture.

Kay moved to the US with her family when she was 7 years old and has traveled to 45 states (the Northeast is all that is missing). She received her Bachelors of Science from Oklahoma State University in Sociology and Art History, with a specialty in African art. She did her college internship in Florida at Walt Disney World, by earning a Ducktorate in Management - Disney Style.

Moving to Seattle in 1992, Kay started volunteering at the Seattle Art Museum (SAM), where she has been a Docent since 1994. In 2001, she received her Masters from the University of Washington's Jackson School of International Studies, with an interest in Middle East studies and also obtained Museology Certification from the Burke Museum. She founded Arab Artists Resources & Training, an international non-profit that lists over Arab artists and organizations worldwide, in June of 2001.

Kay was appointed Arts Commissioner for the City of Redmond by the Mayor for 6 years and has been on the Executive Board of the African Council at SAM and the Salaam Cultural Museum.

In 2008, she started her company A Crafty Arab where she is able to handcraft a vibrant Arab world. When her youngest started school in 2012, she turned toward the business full time and now sells online on Amazon, Etsy, and Zibbet. Her products can be found at the Seattle Public Library FriendShop, Seattle, WA; Ventures in Pike Place Market, Seattle, WA; Fabric of Life Foundation boutique in Edmonds, WA; Arab American Museum in Dearborn, MI; and the Smithsonian National Museum of African American History and Culture, Washington D.C.

The Arabic Alphabet Animal Poster became an idea back in 2002 when Kay received an alphabet poster (in English) by Jill M. Schmidt, a published illustrator of children's books. Kay realized there was a need for an Arabic poster that was bright, fun and colorful and began working with Jill in 2010 to create this product line.

If something happened to your item via delivery, convo me right away. And take a photo of what happened so I know why you are upset. That way we can find a solution together.

I heart PayPal. It's fast, easy and everyone knows it. If you are in need of giving me money in a different way, I'd be happy to work with you on your goal.

I hate to do it, you know I do, but I have to start taxin' the Washington folks. My Uncle Sam makes me do it. Sorry, but hey, we are getting a new 520 bridge thanks to you!

I ship via the USPS. I like them, they like me. My shipping costs cover the stamp, the shipping materials, my Etsy listing fees, my Etsy transaction fees and my PayPal fees.

Yes, my shipping costs are lower elsewhere, however, my shipping policies are separate for each of my selling locations depending on the fees. Some people like Pepsi, some like Coke, so please find a buying site that works for you and I promise to do my best to get that item to you via USPS.

Unless you order December 23rd and expect it by December 25th, then you are on your own.

I am rather sarcastic and fun on Twitter. You should find me there and maybe I'll provide a chuckle or two in your day. Or I might annoy you.

Either way, you should check me out to see.