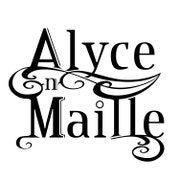 AlycenMaille is taking a short break

Note from shop owner Alyce n Maille is on a break. If you need to contact me please feel free to reach out to me @alycenmaille on Twitter and Instagram as well as Alyce n Maille on Facebook or alycenmaille.com

The Story Behind My Wonderland in Maille

Jennifer is a mother of three mom-preneur who manages all aspects of Alyce n Maille, from jewelry design and production through bookkeeping. Each outgoing order is not only carefully wrapped with Alyce n Maille’s distinctively branded packaging, but includes a personalized, handwritten thank you note; evidence of Jennifer’s desire to create a personal connection with her customers. The designer has a Bachelor’s Degree in Graphic Design and has been a practicing graphic artist for over 16 years. She began designing jewelry as a creative outlet, taking on the complex Dragonscale weave as one of her first projects. “After that, I was hooked,” she says. “I find the weaving process to be therapeutic and relaxing.”

An appreciation for the ancient art of chainmaille is apparent in Jennifer’s meticulously constructed, intricately detailed necklaces, bracelets, earrings and more. Her designs combine old world charm with a contemporary point of view. The result is distinctive, easy-to-wear jewelry that adds style and personality to any look.

Alyce n Maille is a proud member of The Artisan Group, whose associates are included by invitation only. Her jewelry is routinely considered for use by top television stylists for actors featured in primetime shows. Her designs have been worn on the hit CW TV shows The Originals, The Vampire Diaries and Jane The Virgin. Alyce n Maille jewelry has been gifted at GBK’s Luxury Gift Lounges for the 2013 and 2014 Primetime Emmy Awards and 2015 MTV Movie Awards. The company was also a product sponsor at Joyce Giruad’s 2014 Queen of the Universe Pageant.

During a once-a-year fundraiser, Jennifer donates a portion of the proceeds from each sale to Dolly’s Foundation (www.dollysfoundation.org). Dolly’s Foundation provides community support for pet owners in need, including financial assistance for spaying/neutering, shots and food.

Last updated on April 29, 2022
Welcome! I am so happy you found my shop Alyce n Maille. I hope you love my chainmaille pieces as much as I do. Everything you see is handcrafted by me. I take great pride in my work and use only the best materials to create these beautiful handcrafted creations. Please read my shop policies prior to purchase. There is wonderful information on care for your items as well as how to check for your bracelet length. I am always willing to answer any questions you may have. Just contact me through Etsy.

I want you to be completely satisfied with your purchase. If you are unhappy for any reason with your purchase please contact me immediately upon receipt of your item/s. I will do my best to work with you. Any item being returned must be unworn, unused, and in it's original condition. Items must also be returned completely and in it's original packaging. The buyer is responsible for any shipping charges which incur.

I can not be responsible for normal wear and tear. My pieces are delicate, please treat them accordingly and follow the care instructions.

Please make sure your shipping address is up to date PRIOR to purchase.

✦ FLORIDA RESIDENTS ✦
You must pay sales tax on all items purchased.

✦ SHIPPING ✦
If using PayPal, I will ship to your PayPal address. Please make sure your address is up to date prior to purchase.

Your beautiful items will be shipped within 3 to 5 business days upon receipt of payment unless it is a custom order. Shipping will vary depending on the item and the destination, so please read each listing for costs. All orders come gift boxed and packed within a bubble mailer or box. US orders are shipped via USPS First Class or USPS Priority mail. International orders are shipped via USPS First Class International mail.

✦ CUSTOM ORDERS ✦
It will take time to create your beautiful custom piece. It could also take sometime to acquire special supplies needed to fulfill your order if it is something I do not have in stock. PLEASE TAKE THIS INTO CONSIDERATION WHEN ORDERING. I will keep in contact with you with updates during the whole process. :)

✦ INTERNATIONAL SHIPPING ✦
PLEASE NOTE customs fees, VAT fees or import duties might be assessed upon the arrival of your items by the country to which your order is shipped. These charges are always the recipient's responsibility (NOT the seller). I do not mark international orders as "gift" because that is against the law.

Please note, colors shown on your monitor may differ slightly than the actual item due to monitor color settings.

✦ PLEASE check wrist size before purchasing. Alterations after you have received an item can be done but at the expense of the buyer. If you have any questions or need help do not hesitate to ask. ✦

✦ How to measure for a bracelet ✦
Measure with a flexible tape measure to get your wrist measurement. You can do this with a strip of paper or string if you need to, mark where the ends meet, and then measure between the marks on a normal ruler. Take your wrist measurement and add about 3/4" to 1 inch (depending upon how tight fitting you like your bracelets), this is your bracelet length. If you are unsure, just contact me and I will help you.

✦ CARE INSTRUCTIONS ✦
Keep jewelry away from household cleaners and chlorine. To clean your jewelry, wash with a combination of water and non-lotion dishwashing soap gently rubbing your jewelry between your palms. Rinse with warm water and let air-dry. You may also dry it with a blow dryer set on the cool setting. Please DO NOT use jewelry cleaners, cremes, or polishing cloths on your jewelry.

✦ Please handle your jewelry with care. Chainmaille links are NOT soldered and therefore can be pulled apart ☆


THE LEGAL BASIS I RELY ON TO COLLECT AND USE THIS INFORMATION
✦ as needed to provide my services, such as when I use your information to fulfil your order, to settle disputes, or to provide customer support;
✦when you have provided your affirmative consent, which you may revoke at any time, such as by signing up for my mailing list;
✦if necessary to comply with a legal obligation or court order or in connection with a legal claim, such as retaining information about your purchases if required by tax law
✦as necessary for the purpose of my legitimate interests, if those legitimate interests are not overridden by your rights or interests, such as 1) providing and improving my services. I use your information to provide the services you requested and in my legitimate interest toimprove my services; and 2) Compliance with the Etsy Seller Policy and Terms of Use. I use your information as necessary to comply with my obligations under the Etsy Seller Policy and Terms of Use.


THIRD PARTIES WITH WHOM I SHARE YOUR INFORMATION WITH
✦Etsy. I share information with Etsy as necessary to provide you my services and comply with my obligations under both the Etsy Seller Policy and Etsy Terms of Use.
✦Service providers. I engage certain trusted third parties to perform functions and provide services to my shop, such as delivery companies. I will share your personal information with these third parties, but only to the extent necessary to perform these services.


DATA RETENTION
✦I retain your personal information only for as long as necessary to provide you with my services and as described in my Privacy Policy. However, I may also be required to retain this information to comply with my legal and regulatory obligations, to resolve disputes, and to enforce my agreements. I generally keep your data for the following time period: 4 years.


TRANSFERS OF PERSONAL DATA OUTSIDE THE EU
✦I may store and process your information through third-party hosting services in the US and other jurisdictions. As a result, I may transfer your personal information to a jurisdiction with different data protection and government surveillance laws than your jurisdiction.


HOW TO CONTACT ME
For purposes of EU data protection law, if you have any questions or concerns, you may contact me at info [!at] alycenmaille.com or through this shops contact button
See this Seller Handbook article for a sample privacy policy you can customize for your shop.