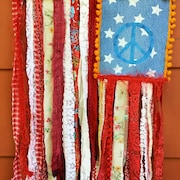 BohemianHwy is taking a short break

Note from shop owner Depression has obscured my creativity, and I just can't sew. I am working on getting help, but navigating our mental healthcare system is difficult at best, and almost impossible while depressed. It's so hilariously ironic! I hope I feel better, and can sew again, but I don't know when that will happen.

Depression has obscured my creativity, and I just can't sew. I am working on getting help, but navigating our mental healthcare system is difficult at best, and almost impossible while depressed. It's so hilariously ironic! I hope I feel better, and can sew again, but I don't know when that will happen.

I'll begin at the begining...

When I was 8 years old, I enjoyed playing a game I invented, which I called "The Button Game." It involved a tray with small, square tiles, that I put in my lap, while sitting in front of our huge, boxy, turned off tv. I'd press a button (actually one of the tiles on the tray) and imagine that anything I wanted to see would appear on the tv screen. Press another button, and something else would show up on the screen. I could see anything I wanted, anywhere in the world, and even communicate with people, just by pressing those buttons. If I had known the word "keyboard", my game might have had a different name.
A few years after that, I recall blurting out to no one in particular, that someday I'd have a store, and everything in the store would be made by me. Every single thing! And people would like the things I made, and I'd sell lots of stuff. (I can't recall just what all the "stuff" was going to be, however.) There was no response to my statement, and even I didn't know how this was going to come about, but I knew it was true, never the less.
But before all of that, my very first memory was exploring my mother's sewing box. It was crammed with all kinds of interesting items- buttons, spools of colorful thread, and packages of different kinds of sewing needles. (Yes, she let me play with the needles. She explained they were for sewing, and nothing else. So, I never used them inappropriately, or injured myself with them.) But the most interesting things in that box were several pieces of fabric. Oh my gosh, how I loved those fabrics!! I couldn't stop playing with them. I wondered about the designs, and how they got there. I loved looking at them, and touching them. They utterly fascinated me, set my imagination on fire, and started me off on a life long obsession.
So, more than half a century later, it's no surprise that I'm here on the internet, selling the things that I make out of fabric. I was always meant to be here. I couldn't possibly be doing anything else.

I want everyone to be happy with their purchases from BohemiamHwy. If there's any problem, convo me and I'll do my best to take care of it. Full refunds can only be given if the returned item is received in perfect condition. This means you can not stuff your return into a tiny envelope. I will not be happy to see that. I also do not pay postage for returns.

I accept Paypal and Direct Checkout. Please send payment as soon as possible, because the quicker you pay, the sooner I can ship your order.

I ship via the US Postal Service.

I am not responsible for replacing any orders once packages are shipped and have USPS delivery confirmation to the address that was provided when the order was placed.

I will not falsify the customs forms.

I am not responsible for any duties or other fees charged by any foreign mail system.

There is a $5 restocking fee for all returned merchandise.