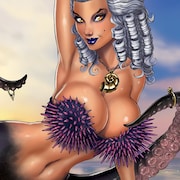 ArtassassinStore is taking a short break

Note from shop owner I am going to be on vacation until June 12th, 2022. Any orders that come in during this time will get shipped when I get back.

I am going to be on vacation until June 12th, 2022. Any orders that come in during this time will get shipped when I get back.

My name is David Harrigan and I'm a freelance comic book artist and illustrator residing in Albuquerque, New Mexico. I've also been known as the Artassassin over the past 15 years. I've been around the block a few times, sometimes getting lost along the way, but eventually recognizing the run down Circle K and getting back on path again.

I've worked on a variety of projects that span from comic book work to frisbee illustration design. T-shirts to advertising for medical practitioners. Some of my art has been shown on stage at a Thomas Dolby concert and some of it is even in the Pentagon. Emphasis on "Variety".

I'm mainly known for my pinup work of voluptuous ladies and most currently I have been doing cover work for Lady Death.

So you may be asking, "If you have done so much, why have I never heard of you?"

That's why i'm the Artassassin, baby. I sneak in, draw, sneak out and let my art do the talking.

Should you be dissatisfied with your purchase, please contact us directly through Etsy with details and information regarding your purchase and issue.

Refunds and exchanges will be granted only for products that have been returned in original condition within 30 days of purchase.

As much as I wish I was all powerful and could control everything, that is not the case.
I am NOT responsible for lost packages. I will provide tracking numbers on orders
placed in the United States. I do not provide tracking for international orders.