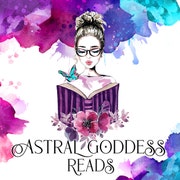 AstralGoddessReads is taking a short break

Just a little about Steph...

She has been writing since she was about 12 years old. Thanks to the influence of her Literature teacher, who was also a poet, she began to write poetry, which allowed her passion for writing to grow. Writing songs followed as her love extended to music. An artist at heart and soul, she enjoys all forms of art, and occasionally indulges in drawing, playing her guitar, and singing.

As any Disney and Star Wars fan would naturally do, she moved to Orlando with her family to be closer to the parks, and lives there happily ever after.

She has successfully continued to bring to life #swoonworthy book boyfriends, and now spends her days listening to sexy heroes and their headstrong heroines tell her what to do.

Steph, has many more adventures to embark on, so make sure you join her in her magical journey.

Join her Newsletter today, and get a free e-book!
https://www.stephanywallace.com/newsletter

You can also stalk her, I mean follow her, and get to know a bit more about her and her upcoming books:

AstralGoddessReads is considered a professional seller (known as a trader) in the EU. What's this?