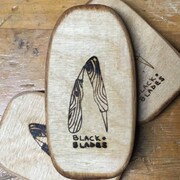 Handmade knives ~ Made in the USA

Anders Black began craving in December 2019 and quickly fell in love with the craft. As a carpenter, he wanted to specialize his tools so he designed and built his own knives. He found out he not only liked carving but knife making as well. He began making more knives than he could use and began gifting, then selling them. He taught his wife Bridget how to make them as well. Welcome to Black Blades!
Anders has a degree in marine carpentry and holds a journeymen card with the United Brotherhood of Carpenters.
Thank you for your interest and we appreciate your support!