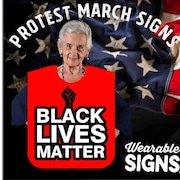 BoyerSignCompany is taking a short break

Note from shop owner Sorry, we are currently closed during renovations. Thank you and Stay Well!

Sorry, we are currently closed during renovations. Thank you and Stay Well!

An opportunity born of empowerment

The idea for Wearable Signs came about in the spur of the moment when I was trying to support my wife by making some signs for her to use in the Woman's March in NYC in January of 2017. I heard that signs on sticks were discouraged so off to the drawing board I went. After a few quick prototypes (she was leaving the next day) I came up with something close to the final product. Well, before they got out the door another family member wanted one for the March in Washington the same day. Job done, I went back to my other sign work and a quiet weekend at home.
Little did I know that both the wearable signs in NYC and Washington were a huge hit. People kept asking to get their pictures taken with them and asking where they could buy them.
Never one to turn down an opportunity that stares me in the face,
Wearable Signs was born. Thanks Donald!