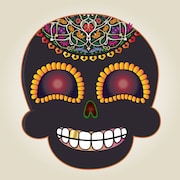 Announcement    Cantina Calavera is your source of fine Mexican folkloric hand crafted polymer clay. A product 100% Mexican and proudly made in the USA.

Cantina Calavera is your source of fine Mexican folkloric hand crafted polymer clay. A product 100% Mexican and proudly made in the USA.

Cantina Calavera: Spooky folk art for the child at heart.

Cantina Calavera was born in PRO of Mexican cultural heritage about the year of 2008 and released publicly in 2011.

Its inspirational base is good design with a "Spookaii" influence that has its roots based on Mexican heritage and other cultural backgrounds, primarily Japanese and American/Occidental ones.

is a term I like to use (and one I came up with for this purpouse) to describe the mixture of Kawaii and Spooky elements in design. When creating Cantina my goal was to keep in mind a playful and beautiful enviroment in what is often times perceived more commonly as scary and avoidable.

Thank you for stopping by and remember to party till death.

At Cantina Calavera we specialize in unique art crafts both cutesy and spooky with a splash of mexican folklore; you'll find all sorts of Art Clay to choose from. My charms, figurines & pendants are perfect for charm bracelets, decorations, jewelry sets or Role Playing Games Action figurines. Collect them all!

My happy creations are my original designs and are all 100% handmade by me with lots of love, care and secret fairy dust just for you.
Thanks for looking and please come back and check often~

If you have a specific idea for a product that you want, please let me know by requesting a CUSTOM MADE ITEM ORDER or write me to cantinacalavera [!at] hotmail.com to have any of your questions answered.   It's my pleasure to provide the only highest quality service for you.(◦◕ ◡ ◕◦)

Payment is expected within 48 hours of purchase.

If we don't hear from you in this time frame, we will cancel your order and re-list the items.  We accept payment via PayPal and also by Credit Cards, remember PayPal is safe, easy and our preferred method of payment. If you don't have a PayPal account but would like to pay with a credit card, our shop and Etsy will allow payments via credit card by non-PayPal members. There is a link on the left side of the PayPal page to continue checkout without logging in to PayPal. Learn more about paying via credit card without a PayPal account.  Please note that we cannot ship your order if we haven't received your payment in full. If you are still having difficulties and problems, please contact us and we'll work it out!

All items are carefully wrapped and packaged individually to ensure it gets to you safely and intact.

=========== I M P O R T A N T ================-
In order to avoid any confusions, please make sure that PayPal shows your CORRECT shipping address as this is where your order will be shipped to. If you need your order shipped to a different address, please notify me immediately after you submit payment. Thank You!

=========== International Customers ==========----
Please check with Customs in your country as duty charges may apply based on the total of your order, or the commodity type. Any duty charge (if applicable) is to be paid by you and is not included in the purchase price or shipping cost. Thank You!

Many of my clay items are uniquely made-to-order and may differ just a wee bit from photos. If an item is in stock, it will ship out within two-three business days. If it is not in stock, or if it is a custom order, it will be handmade especially for you and can take up to one week before shipment (but normally less). Please keep in mind that handmade items do take time, but are worth the wait. You won't find any mass-produced, cheap parts being passed off as handmade in my shop. And I do not use any molds, so your piece will be unique. Your patience is much appreciated, and my goal is to make you happy with your purchase.