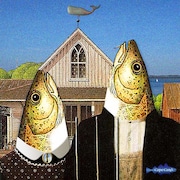 CapeCard is taking a short break

Note from shop owner Cape Card will be on vacation mode while moving. Will be back later in July or early August.

Cape Card will be on vacation mode while moving. Will be back later in July or early August.

Much maligned, often referred to as the “lowly fish” or the most unattractive in the Atlantic, and yet the reason for Europeans venturing to the unwelcoming shores of New England, the codfish has found new life on Cape Cod. Artist and graphic designer, Andrew Newman has given the ubiquitous cod a place in the world of art and humor. His cod cards celebrate all of life’s holidays, joy, beauty, and sometimes sadness.

Why, one wonders, would an artist use the cod as his muse? For Andrew it was a natural evolution. Living on Cape Cod, in the midst of such dramatic scenery provided seemingly endless inspiration for him, and listening to the dropped r’s of native speakers completed his vision. Cape Card has taken the cod to new heights, infusing it with whimsy, humor, and love.. Keep checking our website for new additions.
Cape Card began in December, 2007 with “The Christmas Cod”, and quickly expanded into “The Hallmark of Cods.” Cape Card has allowed Mr. Newman to use his illustration skills and sense of humor to create a wide range of images for a multitude of applications.

In addition to his "cods", Andrew's love of typography and photography has added another dimension to Cape Card®.