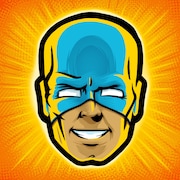 CaptainRibMan is taking a short break

Note from shop owner Back at end of July. Sorry.

Back at end of July. Sorry.

John Sprengelmeyer (AKA "Captain RibMan") is an illustrator/designer and a nationally syndicated cartoonist. His clients include DC Comics / Warner Bros, Hallmark, Marvel, Cartoon Network, Hasbro, CBS, Showtime, Netflix, BMW, The Nerdist, Whataburger, Chick-fil-A, Arby’s, Olive Garden and many more. His work has appeared in a New York Times bestseller, ComicBook Men (AMC), @Midnight (Comedy Central) and The Tonight Show (NBC). He has been a panelist at San Diego Comic-Con and Wondercon.

Along with Rich Davis, he created the comic strip “CAPTAIN RIBMAN“ which was syndicated (by Universal Press Syndicate and Tribune Media Services) in over 300 newspapers. Yahoo! awarded it “Online Comic Strip of the Year.” The strip was featured in The Hollywood Reporter, The Washington Post and Variety. In 2003, a restaurant, “Captain RibMan’s Meat Market,” opened in Lawrence, Kansas.

Throughout his career, he has had the pleasure of partnering with great talent like Stan Lee, Kevin Smith, Jerry Seinfeld, Mark Hamill, Tony Hawk, Sid Caesar & Fred Willard, to name-drop a few.

In 2018, he published “Captain RibMan’s MASSIVE DUMP,” a compilation of his comic strips.