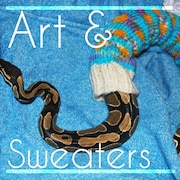 Announcement    PLEASE NOTE: The USPS is experiencing delays in some areas, and this is out of my control. I recommend ordering on or before October 20th for your best chance at receiving your item on or before Halloween, and to choose Priority Mail Express or Expedited at checkout.

PLEASE NOTE: The USPS is experiencing delays in some areas, and this is out of my control. I recommend ordering on or before October 20th for your best chance at receiving your item on or before Halloween, and to choose Priority Mail Express or Expedited at checkout.

In February of 2014, I took an environmental science class that resonated with me to the core. But where do the snake sweaters come in?

Well, part of any science degree at most universities is lectures. So many lectures to sit through, and since I am a visual learner, I found myself having trouble paying attention to the speakers.

I remembered that I had brought some giant knitting needles and some yarn with me to college, given to me by my grandmother. I figured, why not?

Over the following summer, I learned a lot about yarn, needle sizes, and reading patterns. I had knitted here and there in 2013, but I never succeeded in making anything beyond a very ill-fitting sweater for my cat. It was more of a cute curiosity than a serious hobby.

I splurged a little with my summer job money, and bought myself several sets of needles and crochet hooks. Through trial and error, I attempted and re-attempted patterns over and over until I got the hang of things.

Then I saw a post on tumblr, from a biology blog I followed, where the blog owner was joking that she wished she had a way to dress up her pet snake.

I replied that I could easily make a sweater for a snake, since it is just a tube.

It turned into a real commission, and I was so excited that I also made the snake (named Jorgen) several hats and a scarf. Now you can see Jorgen in all the item posts I make on Etsy - he is the lovely ball python modeling a crown and the very first Snock.

What is the origin of "snock"? Well I heard my partner describe what I was knitting to one of his friends as "a snake sock... except with no foot," and the word "snock" came about from that train of thought.

**I am absolutely not the first person to get the amusing idea of knitting a sweater for a snake, but I am 100% positive I am the originator of the word "snock". Just for the record.**

So now, here we are. I make snocks in my spare time, from whatever yarn scraps I have, and people use them to dress up their dear and misunderstood pets.

However, I am completely willing and capable to make sweaters for other animals too - people included! Just send me a convo and we'll see what we can make together.

When I have the time, I also take art commissions, but these are usually rare and far between due to how much time I devote to each piece.

I am dependent upon the measurements you give me for custom items. For snocks, please measure your snake around its widest point and ADD 0.5 inches (or 2.5 cm) to your final measurements, so that the snake can comfortably move through the snock. Take this circumference number and divide by 3.14 to give you the diameter for your snock. For example, a snake with a circumference of 6 inches, you would add 0.5 inches, then divide by 3.14 to get the final diameter of about 2 inches :)

For all handmade snocks, please hand-wash them with a tiny bit of animal-safe laundry detergent and let them air-dry. I do not always know the source or brand of yarn I use, as much of it was gifted to me or reclaimed from leftover stock: to prevent the colors from possibly running, wash all snocks separate from your other fabrics. If your snock becomes stained, look up stain removal methods for acrylic or acrylic blend yarns, as most of my yarn is acrylic-based.

ALL custom orders are handmade by me, and only me; I can physically only knit one item at a time. Because of this, there may be a delay of several weeks when I receive a large influx of orders. If you need an order completed quickly, please feel free to message me and inquire about my schedule - I will let you know if I am available to do a rush order.