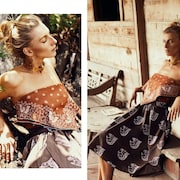 Natural dye batik in my soul.

Chizika is basically me – the founder and the fashion designer of the Chizika label, which I started in 2011.

As a fashion designer, first I worked with African fabrics in Tanzania. From there is also the name of my label which literally mean “crazy person” in Swahili slang. Then I went to study Batik traditional technique of decorating and colouring to Java, the place of its origin. During my stay I discovered several different methods of waxing batik and natural dye which, immediately, became my choice of heart. My life vision is a sustainable type of life. We all live in one planet and we need to treat it well, we can change a lot just based on our own choices. As a cultural anthropologist it is possible to capture the inspiration and cultural influence of my travels in each fabric. My aim is to work with local artists and craftsmen in Indonesia to support the local economy. Behind every person involved in the manufacturing of the fabric is an interesting story. And that is what I like.