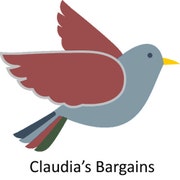 We Have Something in Store for You

Announcement    We search yard sales, estate sales, flea markets, auctions and attics to find items you didn't know you were looking for
Visit our other Etsy Shop - CamBargainStore- https://www.etsy.com/shop/CamBargainStore

We search yard sales, estate sales, flea markets, auctions and attics to find items you didn't know you were looking for
Visit our other Etsy Shop - CamBargainStore- https://www.etsy.com/shop/CamBargainStore

ClaudiasBargains ... started with a “Just Because I Love You” gift

Our neighbor, a kind, elderly gentleman named George, knocked on our door one day and presented me with an ordinary birdhouse, painted the simplest of blues. With that smile of his he handed it to me and said “I made this for you – just because I love you.”

When my husband, Kenny, got home that evening I showed him the birdhouse and told him what George had said. We both agreed the birdhouse needed to be placed somewhere very special. While Kenny mounted it on a post and dug a hole in our garden, I casually mentioned how cute is would look with some wood birds flying up the post. Kenny stopped what he was doing, turned to me and said – “Make Some.”

Well, I had never used a saw in my life, much less cut out something as detailed as a flying bird. I was over 40 years old for gosh sakes! Don’t people start working with sharp, moving tools at a much younger age? Still …. it sounded interesting. Don’t get me wrong. I wasn’t completely lost. I had other talents. I could draw pretty good. Some other family members besides myself must have gotten this gift from my grandfather who was an architect.

Anyway, I started to hunt down pictures of birds from the internet and my printshop Gallery. Once I found the pictures I liked, I cut them out and traced them onto my board. At this time my husband handed me his jigsaw and told me to have fun. Boy did I! I was cuttin’em like a pro! And then I was paintin’ em like a pro! Then I was mountin’ em on the post like a pro! Then I realized I was hooked.

Soon Kenny and I had enclosed our carport, added electrical outlets, workbenches and tools. A jigsaw, a band saw, a scroll saw, a sander, and more. I made cabinets for our kitchen and bath, tissue box holders, birdhouses, bird feeders – anything that caught my eye. Before long our home became overrun with my creations. My woodshop was moved to the basement – out of the summer heat, and Kenny took over the carport shop.

We have a “Peddlers Mall” not far from us in Elizabethtown, Kentucky. It is an old Walmart building where you can rent a 10 x 12 ft space to sell from. It has over 500 spaces. We rented a space and started selling. Kenny is a flea market, auction, estate sale, kinda guy so he started adding things to our booth to sell. We are up to four booths now - mainly with Kenny at the helm. If you are ever in the area, stop by. Just ask the girls at the desk where Kenny's booths are. They'll tell you. All items are tagged Booth 422.

I decided to go the internet route. At first, I opened an eBay store but soon decided it didn’t give me enough design freedom so I created a Web Store. I still list items on eBay, (claudiasbargains2014) but I like having the web store more. I also opened this shop on Etsy called ClaudiasBargains.

I am trying to find time for my woodshop – I've missed it. I've made a few things lately and have my brain cells working on a lot of ideas! They'll get created soon.

As for dear George, who started all this. He passed away in 2003, a few months before my father. His - just because I love you birdhouse - is still in our garden waiting for the next generation to fly from the nest and leave their mark on the world.

Last updated on May 9, 2022
Please read the following to learn how ClaudiasBargains got started:
https://www.claudiasbargains.com/about-us.html

COMBINED SHIPPING
We will combine shipping and handling when possible and items are not compromised. Please contact us

SHIPPING CARRIERS
Sometimes due to an item's size and/or weight, or other factors, it is not cost effective to ship the item thru The United States Postal Service. In these situations we may ship thru another, less expensive, carrier. After you have paid for your order using USPS, any shipping overage, less handling, will be refunded thru your Etsy account. Please contact us asap after your purchase if this is not acceptable as we may not give notice to this shipping change.

TRACKING
Tracking information will be added in Etsy when available

INTERNATIONAL SHIPPING
If the listing does not offer international shipping, anyone outside the United States and its territories please contact us for a shipping quote. International buyers are responsible for any and all additional fees and taxes associated with shipping their item(s). We will not list the item as a gift.

OLDER - VINTAGE and ANTIQUE ITEMS
Due to the nature of these items you will find conditions you will not find with purchased new items. Scratches, scuffs, different colored patina, surface rust and small dents are some blemishes common in older items due to age and use. With paper items you may also see scuffs, small tears or nicks, age tanning, and creasing. We feel these factors add to the charm and character of our older items. Therefore, we may not state every blemish in the listing. Please study the photos carefully as they are as much a description of an item as the wording.

TELEPHONES and ELECTRICAL PRODUCTS
When possible, I check each of these item before listing the item. Results will be shown in the listing. An untested item means I have no way to test the item for functionality. I cannot guarantee how long any item will be operational or if it will be compatible with your situation. All items are offered on an as-is basis