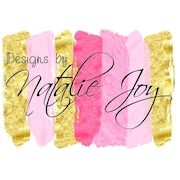 DesignsbyNatalieJoy is taking a short break

In August 2011 we were walking around our local antique store. We noticed a sign that said a booth was going to be vacant soon. Out of curiosity, we asked the clerk how the whole consignment thing worked. She said booth spaces are hard to come by and if we wanted it we should act fast. Well...we did! We signed a contract without the first item to put in our booth!!! We had 1 month to get our act together! The only stuff we had made was some pieces that were in our house! We decided if we had to take the furniture out of our house to have something to put in our booth we were willing to do it! After a lot of hard work, we were able to create enough stuff to fill our booth! We had our Grand Opening the first week in September! Then we decided to do a few arts & crafts shows to try and get our name/brand out there. The owners of the antique store have another location in the neighboring state. They encouraged us to go see the other store because they didn't have a vendor who even came close to offering the type of stuff we have. So one Saturday afternoon we find ourselves visiting the store. And wouldn't you know it - there was 1 vacant booth!!! It was like fate! So we signed the contract! We had 2 weeks to move in! We scrambled around and got some stuff made, painted the walls, and moved in!
At some of our craft shows some of the other vendors asked if we were on etsy and Pinterest. I said I had never heard of either!!! So I immediately start researching! I started a Facebook page, joined Pinterest, and started my etsy shop!
We are having a blast in our new endeavor! Our date nights consist of "picking"!!! We go to thrift stores and auctions! We've been known to do occassional dumpster diving! Of course, we don't have a shop....we work in our garage! My car has been parked outside for months!!!!
Things have just moved along at such a quick pace sometimes I wonder if I can keep up! Who knows what the future holds! Stay tuned for the rest of the story...

Last updated on April 29, 2022
Simply Shabby was created to blend old and new. Our décor is made from re-purposed materials such as window sashes, doors, balusters, and re-claimed wood. We take old items that would ordinarily be thrown away and transform them into something beautiful and new. Creators Allen and Natalie McDonald turn salvage into works of art. We will gladly customize pieces to fit your needs. Let us turn a piece of your treasured past into a new creation you can treasure from now on…

We now offer e-design services! My name is Natalie McDonald and I'm an interior designer with over 12 years experience in the kitchen and bath industry. I hold a Bachelor's of Science degree in Interior Design from the University of Montevallo. While I have been doing freelance work part time for years, I have decided to pursue it on a full time basis. Take a look at my portfolio and send me your field measurements! I'll be happy to provide you with a beautiful design complete with floor plan, elevations, perspectives, the whole nine yards! I can even provide item lists and installation notes! Let me help you create the kitchen of your clients' dreams!

Custom e-designs are NON-REFUNDABLE.
This digital concept plan is a tool to assist in material selections. The items shown are samples only and may not be an accurate representation of the actual product. Please check dimensions and read reviews of all items prior to purchase. Do your research so you can make the best decision. Designs by Natalie Joy is not responsible for the means, methods, or procedures of construction, fabrication, delivery, and installation, or safety precautions in connection with this e-décor project; for the acts or omissions of the contractor, supplier, or other person performing the work associated with the project; for any failure of them to meet any schedule or deadline. Designs by Natalie Joy cannot be held responsible for arranging repairs, replacement, or freight claims for purchases made in conjunction with recommendations for e-design projects.