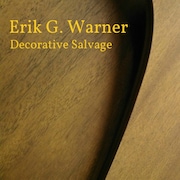 EGWDecorativeSalvage is taking a short break

Note from shop owner Erik G. Warner Decorative Salvage is currently on holiday while we rethink the focus of our business. If you have purchased from us or enjoyed our listings, thank you for your support!

Erik G. Warner Decorative Salvage is currently on holiday while we rethink the focus of our business. If you have purchased from us or enjoyed our listings, thank you for your support!

Erik G. Warner Decorative Salvage started in 2011 under a different name - Mid-Century Vibe. Co-owners Erik and Mary Warner were renting a space in a small antique shop in central Minnesota and found that they kept picking mid-century items, hence the original name. As the business grew, Erik began refinishing the furniture he was picking. It was a skill he had picked up as a child from his Grandma Lillian and he is constantly working to improve his work. While the Warners don't sell their furniture on Etsy due to the cost of shipping, they do use their Etsy Shop as an outlet for the smaller mid-century items they find. In 2015, they changed their business name to Erik G. Warner Decorative Salvage in order to expand their picking into other eras (although they still lean heavily on mid-century). They enjoy bringing vintage objects of desire to their customers.

Last updated on May 10, 2022
Erik G. Warner Decorative Salvage sells vintage objects of desire, primarily from the 1940s through the 1960s. It is owned by husband and wife duo Erik and Mary Warner. Erik has an eye for picking interesting and high-quality vintage items. He handles most of the cleaning, refurbishing and photographing of items. Mary handles the nitty-gritty of bookkeeping, paperwork and other office-y tasks, and pitches in on the cleaning and photography when needed.

Have a look around our Etsy shop and revel with us in the goodness of our vintage finds.

Erik G. Warner Decorative Salvage ships via the United State Postal Service (USPS) to addresses in the United States. (Send us a convo if you are interested in international shipping.) Insurance will be provided on fragile items and those with a value of $50 or more. The shipping cost will also include delivery confirmation.

The buyer is responsible for shipping and handling costs, which are nonrefundable. Shipment of items will be made within 3-5 business days after your payment has cleared.

No shipping on Saturdays, Sundays, or holidays.

If you need priority shipping or have other shipping questions, please send us an Etsy Conversation (convo).

We recycle shipping materials as much as possible, so boxes may occasionally come with markings from other companies. The shipping label will clearly identify Erik G. Warner Decorative Salvage.

Shipping and handling charges on taxable items are taxable for online purchases by Minnesota residents.

The items you purchase from Erik G. Warner Decorative Salvage are vintage items, most of which are between 40 and 70 years old. With age come wear, dings, dents, and imperfections. While we spend time cleaning and repairing items as needed, we cannot guarantee completely blemish-free products. Please enjoy our vintage products for their age and patina.

Due to their age, we cannot guarantee that mechanical or electrical items we offer will be in working condition.

As a general rule, Erik G. Warner Decorative Salvage avoids putting items on hold or reserving them for customers. However, if a customer expresses interest in an item but has questions about shipping or some other aspect of the item, we will put an item on hold for a week in order to provide the time needed to work through the issue. We will put ON HOLD or RESERVED in the item description.