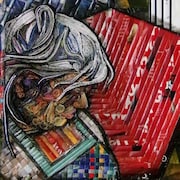 Announcement    Our shop will be closed for the 2021 Holidays Season. In Arkansas, Art Ventures gallery and Crystal Bridges Museum stores offer some of my creations. We will be back in 2023.

Our shop will be closed for the 2021 Holidays Season. In Arkansas, Art Ventures gallery and Crystal Bridges Museum stores offer some of my creations. We will be back in 2023.

Art from Brazil to United States of America

Eloa Jane was born the second youngest of nine siblings in the small town of Caratinga in the state of Minas Gerais, Brazil. From an early age she demonstrated interest and ability in the arts and crafts. She sewed her own clothes, painted, sculpted, played the guitar and even toured local churches with her all-female quartet at the height of the Bossa Nova days. It was this artistic facet of her personality, combined with a passion for mathematics that drove her to acquire a degree in Architecture from Universidade Federal de Minas Gerais. She was an architect for 25 years and boasts an impressive portfolio of residences and Houses of Worship. Igreja Batista da Lagoinha is one highlight of her career. The domed structure was built in 1997 and has a capacity of 7,000 people. Despite the apparent success in her career things were never easy for Eloa Jane. Weary from the economic obstacles she faced in Brazil, she decided to start afresh in the United States. She moved in 2005 and spent a decade working hard to rebuild a life for herself and her children, moving around from place to place searching for open doors.
The challenges she faced in this new season of her life once again brought out her artistic bent. Starting a life as an foreign alien is never a simple undertaking and one is unlikely to come out completely unscathed. Eloa Jane suffered with the sort of ailments that afflict the soul more than the body. Being in a new country, grasping a new language and having to relearn how to perform the simplest of tasks, like writing a check or sending a letter in the mail, can easily make one feel inadequate. Moreover, it is difficult to remain cheerful in the face of uncertainty about the future. For artists, struggle is often a catalyst for inspiration and for Eloa Jane it was an outlet, a means of processing through pain and grief. Art became more than a pastime for Eloa Jane. It is arguably what kept her going through the toughest spots along her path.
She emerged with a heightened need to create and a sense that her happiness did not come from the pursuit of financial comfort and convenience. Rather, it came from filling her days with meaningfulness, resourcefulness and self-actualization. With little money to buy supplies Eloa Jane chose paper, specifically the piles of paper that are stuffed into mailboxes daily, as her way of creating art. Eloa Jane’s use of paper waste to create relief and three-dimensional art satisfies her need to, in her own words, “find fulfillment in creating meanings rather than owning disposables.” Using what appears to be an endless supply of trash, she can spread awareness while making an impact on saving the earth’s resources one person at a time, starting with herself. The resulting work is instrumentalist in function, imploring the viewer to take stock of our wasteful practices, but at its core it expresses a distinct sense of hopefulness about the future.


I do what I love and I make it with love.
EloaJane