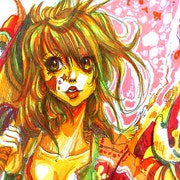 Currently a caricature artist at the Disney parks in Anaheim, Emily Nguyen was formerly known as a Disney fan-artist from 2007 through 2012, creating speed paint videos and digital paintings with a mouse as well as other humble mediums. She also had a small spotlight within the English-speaking Tokusatsu community between 2009 through 2012, particularly through her blog and fanart of Beetleborgs/B-Fighter.

I will ship within 1 to 2 business days. If there are any circumstances where I cannot ship the item within the said time frame, I will immediately notify you.