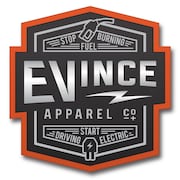 Wear support for a sustainable future.

EVinceApparel is taking a short break

Note from shop owner We are taking an extended break. Thanks for supporting and driving electric!

We are taking an extended break. Thanks for supporting and driving electric!

EVince Apparel Co.'s branded apparel was created to show support for a transition to a sustainable future. We believe electric vehicles are a critical part of that transition which is why "EV" and a lighting bolt are major elements in our wordmark.

In 2008 I sold my car. Gas was costing me $4.35 per/gal, my country was in its fifth year of its war and occupation of Iraq (a war over oil) and the continuous media reports about the dangers and effects of human induced climate change were overwhelming my denial.At this point in development of our civilization not owning a vehicle can make being a member of society very difficult. Fortunately I had moved to the Belltown neighborhood next to the downtown core of Seattle and my employer was about 3 miles away from my apartment which made a combination of public transportation and walking a livable option.

For the first year it was refreshing not burning oil for my personal transportation (except for the occasional bus ride). The 2.4 mile walk to my office in the SODO up and down busy 1st Ave and 1st Ave S. provided ample time to observe the constant stream of gas burning vehicles which were a slow attrition on my self-righteous mentality. Every car that passed me by was a reminder that my actions were not contributing to any solutions that could stop societies non-stop burning of fossil fuels. That is when my research into electric vehicles began.

During the first few months of research, the electric motorcycle manufacturer Brammo had announced their sport bike concept the Empulse. The design was captivating! A futuristic cafe racer with some impressive performance and range specs at a price point that made it accessible if I could accept it as my only mode of transportation. If I could foot commute miles year round in Seattle's climate I could motorcycle in it. An email pre-order set my intentions to purchase and I began to wait for the projected production date about a year and a half away. When that date was nearing, Brammo announced that they would be taking more time to integrate a transmission into the bike to offer a performance boost. Unfortunately this boost came with an additional year of development. An additional year of walking and waiting.

When the May 2012 unveiling finally came, I took the day off of work to watch the live-streamed event. There were some changes to the final production version, especially the increased price, but I was still very much on board. After many more months of delays and issues in setting up a dealership partner in Washington State, Brammo's regional sales director Jake let me know that they were planning on delivering some bikes up from Oregon to the Seattle area if I was ready to make my purchase. The following week in April of 2013, I was one of four excited individuals to take delivery of the first Empulse R's in the State of Washington. With my 98121 zip code I became the first Brammo Empulse R owner in Seattle. About five years after selling my ICE car I finally had 100% electric personal transportation. Choosing to buy an electric vehicle didn't stop the oil well pumps. It didn't stop car manufacturers from building excessively large SUVs with disturbingly poor gas mileage or curb the demand for them. Choosing to buy an electric vehicle DID support those who made the brave decision to offer the product. These are the same people who are employing the people that are working on advancing electric motor tech and pushing the limits of battery and charging tech. Putting intelligent, highly educated people to work developing and advancing the technology that can move us away from burning fossil fuels towards sustainable transportation solutions (not wasting great minds developing frivolous tech to deceive emissions tests - ABSOLUTELY DESPICABLE Volkswagen! ).

Electric vehicle sales have been slowly increasing but they have a long way to go before they have a majority market share, although the recent pre-orders of the Tesla Model 3 show tremendous promise (Congrats Tesla!). With the price of oil recently crashing to below $30.00 per barrel, these are fragile times for humans progress towards moving away from fossil fuels. In the face of limited range, an underdeveloped charging infrastructure and higher up-front costs, I am proud to be a part of and support the electric vehicle movement. I created EVince Apparel Co.'s branded apparel so that when I am not operating my EV I can still show my support for the worlds transition to a sustainable future.