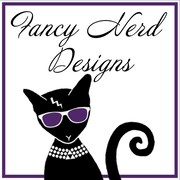 Handmade Jewelry for the Chic Geek

Announcement    Free Shipping on all US sales over $35!

Free Shipping on all US sales over $35!

To start my story, you have to go back to the very beginning.

I grew up in Austria, in a little village called Gumpoldskirchen (If you can pronounce that I may give you a discount). TV was very limited, and VHSs even more so, and DVDs weren't a thing yet. However, the Original Star Trek was one of my dad's favorites, and I remember watching that with him as a young girl (it was dubbed into German so much of Shatner's Shatnerness may have been lost). We eventually moved on to Star Trek: The Next Generation when that became available.

After moving to the U.S. at age 12, I went through a rebellious phase where I would watch forbidden shows, like The X-Files, which I would watch secretly through most of it's original airing. I developed quite the reputation in High School for being a die hard Mulder fangirl. I would cover my text books in photos of him. All of my allowance went towards my X-Files DVD collection ($80-$120 a season, at the time).

It was not till college that I discovered Harry Potter. I was able to attend 4 midnight book release parties and 5 midnight Movie openings. Dressed up as Luna or a Slytherin, of course.

However, as I grew older, got my bachelors in Mechanical Engineering, got my first job, I started to notice that other grown ups didn't walk around with Luna's raddish earrings. They didn't wear T-Shirts of Totoro stuck in a TARDIS. They didn't wear Harry Potter jackets, or Darth Vader hoodies.

Though I always have marched to the beat of my own drum, I do know that it isn't always appropriate to wear your favorite fandom merch. And that makes me sad. That's when I came up with this idea.

I want to wear something that represents my fandom, something that makes me smile when I see it, but something that doesn't literally say to my boss during the morning meeting: I'm wearing a red fezz and bow tie because I love Doctor Who.

Instead, why not creating something that I love, that reminds me of my fandom, something that may catch the eye of fellow fans, but it doesn't scream out "don't take me seriously because I'm wearing a bright red shirt with a blue print of the Millennium Falcon on it".

By the way, I own most of these gloriously nerdy items, so please don't think I am disparaging them. But instead, know that I am like you, nerdy to the core, and dying to release that nerdiness into the wild.

But, as a grown up, I also understand that there is a time and place for everything, and I believe I can help furthering the reach of nerdiness into grown up society without being looked down upon or or discouraged.

I created Fancy Nerd Designs so I could share classy and elegant jewelry, created with specific fandoms in mind. Something that would bring a smile to a fan's face, but can be passed off as simply a beautiful piece of jewelry to the rest of the world.