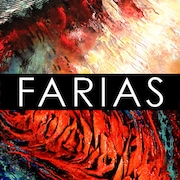 Thank you for supporting original art!

Thank you for supporting original art!

F E D E R I C O • F A R I A S
Primarily an acrylic painter, he also works extensively with mixed media, other types of paint and techniques, (like watercolor, airbrush, pencil, markers). Raised in Argentina, studied Graphic Design in Venezuela, where he got his BFA in Graphic Design and Illustration, shortly after graduating he moved to the US where he discovered his passion for Abstract painting, since then he spends his time in his Grand Rapids studio, creating and painting.
"My paintings are a personal reflection of the world around me. Feelings and emotions that can be interpreted in different ways through each viewer's eyes. To me, painting and creating are part of my DNA, it's who I am..."

M A R I A • F A R I A S
Graduated as a Graphic Designer/Illustrator in Valencia, Venezuela. Residing in West Michigan since 1995. The visual arts have always played a significant role in her life, influenced by both of her grandfathers (both creative artists) and grandmother (ceramic painter and handmade extraordinaire), she developed her artistic skills from early childhood. Her style is abstract urban art, and works primarily with acrylic paints in combination with various mixed media. She loves experimenting with different mediums to create complex textures. Her paintings are inspired by her surroundings and emotions.
"Painting and creating are my passion, it enables me to portray what I'm feeling on an empty canvas, for everyone to see, feel and interpret on their own way…"

All our paintings are 100% ORIGINAL hand painted by us, NOT a reproduction.

• Direct Payment & PayPal is the preferred method of payment.
• Money orders and Personal checks are also accepted. Note that the paintings will not ship until payment has cleared.
• Payment on local pick up also accepted (cash only).

• Flat shipping to lower 48 US states only.
• International shipping available.
• International buyers, please contact me before making the order so I can calculate your shipping costs.
• Painting will be shipped 3-5 days after payment has cleared, and shipping transit will take 3 to 10 days, depending on your location.
• Each painting is protected with bubble wrap and packed with extra care in corrugated boxes.

S P E C I A L • R E Q U E S T S
(commissions)
Do you want a custom painting? Please email me your request and I'll send you a quote, I'll be happy to create a special painting just for you.


S A T I S F A C T I O N • G U A R A N T E E D
If by any reason you are not completely satisfied with your purchase, please let me know ASAP and I'll work with you until you are.