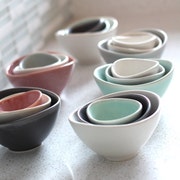 FringeandFettle is taking a short break

Note from shop owner I apologize, I have been unable to keep up with demand and do not have the inventory currently to open my shop. If you live in the Minneapolis area please come check me out at:
Mill City Farmers Market, Sat. July 9th 8am-1pm
Art at St. Kate's, St. Paul, Saturday July 9th 10am-5pm

I will reopen after these two shows :)

I apologize, I have been unable to keep up with demand and do not have the inventory currently to open my shop. If you live in the Minneapolis area please come check me out at:
Mill City Farmers Market, Sat. July 9th 8am-1pm
Art at St. Kate's, St. Paul, Saturday July 9th 10am-5pm

I will reopen after these two shows :)

I am the one-woman show behind Fringe and Fettle Ceramics, everything little part of the business is done by me. In 2011 I was working full time when I took a blind leap and quit my job to pursue pottery. I moved up to the north woods of Wisconsin to my family’s cabin and did nothing but make pots for the next 6 months. It was fantastic.

My studio is now is Champlin, MN. My husband and I converted our two car garage into a pottery studio and I love it! My commute involves walking about 10 feet across the driveway.

I make things that I love. That’s the secret. It sounds kind of dumb and simple, but it’s true. I think for a while I was really caught up in trying to make what other people wanted, what would sell well. But it wasn’t until I threw that out the window and started making things that I wanted, that I loved, that I really found my style.

My forms are soft and playful, telling you where to touch, where to look. A pattern hides under the belly of a curve, or dances quietly around a rim. I’ve been enamored with texture for a while now. I am compelled by the voice it has, and the interactive quality it presents. It invites you in, asking you to hold it, to use it. I am influenced by the romanticized atmosphere the kitchen creates; of family meals and childhood memories, of beauty in the everyday encounters.

Last updated on May 10, 2022
Welcome! Thank you for checking out my shop. I make food-focused, functional pottery. Everything I make is food safe--I never use lead glazes. I recommend hand washing for my pieces, primarily to protect fragile handles and rims from clinking against other items inside a dishwasher. Items with gold added are NOT microwave safe, and it will be stated clearly in the item description is is not safe. Everything else can go safely in the microwave.

Pieces are made one at a time, by hand. This ensures that you will be getting a truly unique, heirloom quality piece.

GIFTS
I am happy to ship directly to gift recipients and include a complimentary gift note. Please convey your requests in the note to seller box during the Etsy checkout process.

I love hearing from my customers, so feel free to contact me with any questions.

If an item reaches you in a damaged condition, I will gladly exchange it for a replacement for a similar item of equal value, or give you a full refund. Please notify me within 5 days of receiving your item with a photo of the broken piece.

I do my best to accurately depict and describe the items in my shop and I ask that you keep in mind that all items are made by hand and by nature have imperfections and variations. If you are unhappy with the items that you receive, please contact me and we will work together to resolve the issue. I want you to have a pleasant experience!

If you change your mind and would like to return your item, a return request must be made within 7 days of receiving an item. I will direct you on how to send the item back, and the return postage if the responsibility of the buyer. The item must arrive in the same condition in which it was sent or it will not be accepted. Returned items must be shipped within 7 days of the return request. Please contact me with any tracking info so I will know when to expect it. The cost of the item minus shipping charges will be refunded to the purchaser.

Each item description will include it's estimated shipping time. Many items are made to order and take 3-4 weeks to produce before they can be shipped. If it is a ready to ship piece it will be sent out in 1-3 days. I primarily ship USPS Priority mail so your items will arrive in 3 days of the ship date and will have tracking number; you will receive an email notifying you with this info once it ships.

I am happy to ship internationally as well, each listing should be about to calculate the cost for you under the shipping tab. I am happy to help if you have questions or run in to trouble calculating.

I am to provide local pick up. I recently move to Champlin (next to Brooklyn Park), so we can arrange a pick up from there most days or evenings.

If you live locally and would like to save shipping cost, please email me to receive a promo code to remove the shipping charges, and arrange a time for picking it up.