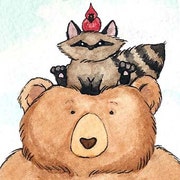 GeorgiaDunnStudio is taking a short break

Note from shop owner My Etsy store is on vacation, until originals are available for sale once again.

My Etsy store is on vacation, until originals are available for sale once again.

Whimsical illustrations in watercolors and ink.

I grew up in a small town on the coast of Rhode Island. My childhood was spent playing in the forests and swamps surrounding our house; battling trees with sticks, outrunning imaginary monsters, and coloring pictures of each adventure once I was safely home. I had been drawing for about as long as anyone could remember, and sometime in my late teens I'd begun painting as well. My dream was always to be an illustrator, but like so many folks with a dream, rent money and health insurance had paved the way to a day job. After graduating from college with a bachelor’s degree in Fine Art, I found myself working at a bank.

Each night after work I rushed home, made dinner for my cat Elvis and I, and settled down to paint for a few hours. Occasionally I would sell a painting, and I wrote a webcomic that posted weekly, but more often than not I would finish an illustration only to tuck it safely into a drawer. The little pile grew, waiting for the day I would get brave and pursue illustrating full time.

As it would happen, life took a 3,000 mile detour in 2010 when I agreed to move to Seattle with my husband five days after our first date. (You can find that story on my blog). On our third date we packed up my illustrations, Elvis, and my apartment to drive for six days across the country. Having lived in Rhode Island all my life, this was a huge change. I went from living in a small town with about 1600 people to a sprawling metropolis of 3 million.

I discovered bravery sort of grows from one decision to another. I took a chance and began selling prints of my illustrations here on Etsy and in independent shops across the country. I have since shipped my work to folks all over the world, from Japan, to Denmark, to Australia, to England, to Spain, and almost every state in the nation!

As time went on, my comics gained an audience and eventually my comic 'Breaking Cat News' was syndicated through GoComics and Andrews McMeel Syndication. Today my comic is in newspapers across the country, and I'm the author of two published books, with a third on the way! (I still hope to one day illustrate children’s books, as well!) The support and encouragement I have received through customers on Etsy and readers around the world is overwhelming.

Today I live in Washington state with my husband Ryan, our children Luke and Gwen, and our cats Elvis, Puck, Lupin, and Goldie (who star in 'Breaking Cat News'. BCN is still syndicated through Andrews McMeel Syndication, and to date Andrews McMeel Publishing has published two books with a third on the way! 'Breaking Cat News: Cats Reporting on the News That Matters to Cats', 'Lupin Leaps In', and 'Take It Away, Tommy' can be ordered through Amazon, Barnes & Noble, Indie Bound, or your local bookstore!

I do my best to balance life between cartooning and being a Mom, and love both jobs thoroughly.

Last updated on April 29, 2022
Thank you for visiting my shop! Please take a moment to read my policies. If your question is not answered here, simply send me a conversation and ask away!

I accept PayPal, credit cards, and Etsy Gift Cards for payment. Through PayPal you can easily use all major credit/debit cards or even write an "echeck" and use the funds from your own bank account!

I mail out prints and finished paintings within 2-3 weeks of receiving your payment. (If you use an echeck, after the echeck clears). Commissions are mailed out by 8 weeks, I need two months for most commissions. I try to mail them out sooner than this, but between the kids and the comic things can get quite hectic! Many times the print orders do take the full 3 weeks and commissions take the full 8 weeks, please prepare accordingly when you order. Thank you for understanding! I wish it were faster too, but this is the realistic time frame we can work with and not get overwhelmed/get sloppy/cut corners/cry.

I ship all packages First Class through the United States postal service. Items typically arrive within an additional 3-5 business days after shipping in the United States, and 10-14 business days internationally (yes, even Canada). All paintings, prints, and paper dolls are slipped into protective cellophane sleeves and sent in sturdy recyclable mailers.

I will ship to the address mentioned in your Etsy purchase. If you need it shipped to another address, please indicate at the time of purchase.

Question: Do you accept commissions?
Answer: Occasionally I offer special commissions for sale in the shop. Those listings will have specific guidelines and please refer to them. If there are no commission spots up for sale in the shop, then no--I'm not accepting commissions or new projects at this time, my apologies. Again, it's just time. Between taking care of my kids and writing the comic there is usually no time for outside commissions. Thank you for understanding!

Question: Can you change this print to be different colors? A different animal? Etc?
Answer: No, These were all painted on paper with watercolors. I'd have to either repaint the painting or paint over it. This would be a commission, and I'm unable to take commissions right now. Also, if I'm being honest, I don't want to scribble over my paintings, that sounds like a bummer. There are many amazing artists on Etsy who take commissions and create beautiful, customized pieces and you should talk to them!

I do not trade prints, I am so sorry. Several folks on Etsy have approached me asking if I will give them prints for their products as an even trade. Giving away work is difficult for me because of the costs associated with the supplies I use to create my prints, and I feel TERRIBLE every time I have to decline a trade request. Please do not ask.

Just have a question? Send me a conversation! I'm always happy to discuss my work. Even if it's something as simple as "Does that robot have a name?" I would love to answer your questions, whether you decide to get one of everything or are just enjoying an afternoon of virtual window shopping!

All illustrations and designs in this shop are Copyright Georgia Dunn. No image or creation may be reproduced.