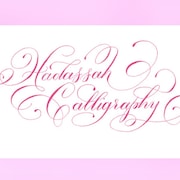 HadassahCalligraphy is taking a short break

Note from shop owner Sorry, my shop is closed for a personal hiatus. Thanks for understanding.

Sorry, my shop is closed for a personal hiatus. Thanks for understanding.

It all started in 2007 when I was searching for a homeschool handwriting curriculum for my then second grade son. I had taught my daughter with Abeka books but was looking for something more traditional. I stumbled upon Spencerian Copybooks. At the time, I thought they looked beautiful but a little too difficult for a second grader. I found the IAMPETH website and read and read. I met a local calligrapher and went to her studio in Port Washington. When I came in she was writing at her desk and I was mesmerized. After I picked my jaw up from the floor, I went home and found the tools I needed to teach myself how to write. My first attempts were quite pathetic, but after a few months I had the hang of it and was doing pretty well.

Then I had a accident where I injured my hand. I was in so much pain that I would pretend I was writing--kind of like using a sparkler to write your name. I would do that in my head, or with my fork, or... This severe pain led to two surgeries in my hand which I will spare you the details of! The day the doctors took my bandages off I was so excited to be on the road to recovery but then... I was in a car accident that tore my thumbs backwards. The same day they took the bandages off from the prior surgery. I was just starting to be able to write again after the two year hiatus caused by the previous injury! That night my thumb wouldn't work. Wouldn't move. I went through 2 years of therapy and then the doctors decided to do a really major hand surgery. The surgery resulted in my having to learn to write all over. Forget calligraphy. I couldn't even chicken scratch my name!

Little by little, I improved but never really wrote much because, quite frankly, it hurt.
Then in 2012, I was contacted by that calligrapher in Port Washington to go to the IAMPETH conference here in Milwaukee. I was gifted the tuition. I couldn't afford to go on my own. I was flabbergasted that someone would do that for me. So I prepared for the convention by writing as much as I could in the week prior--mainly so I wouldn't look like an idiot before all the penmen I looked up to for years.

That conference was a pivotal point in my writing career. Of all the things I learned at the conference, confidence was the most important. I can't say I had any before going and even after, I just felt like, "Sure, I can do this." And I just never stopped writing after that. I started an instagram account and was blown away as follower after follower joined me in my journey. They encouraged me to keep going, to keep pushing myself. When followers were asking me for advice, I realized, I had become a true penman. Maybe not a Master Penman (which maybe someday I will gain that status), but definitely someone people were admiring. Friends told me to open an etsy store and I put it off and put it off. I finally opened it in January 2014 and am just waiting to see where the Lord leads me.

Last updated on May 9, 2022
I can't express the joy I feel when a bride or client is thrilled with my lettering. Whether I am commissioned to paint a huge poem with illuminated lettering or small wedding placecards, I see each item as a masterpiece, a work of art. My goal is to make your project individually special, amazing beautiful, and wonderfully perfect.

After you decide on the services you want from me I will make a down payment listing if 50% of the total. This is when you are officially booked on my calendar. When the lettering is complete I make a second listing for the final payment. Once it is paid, I send you back your envelopes, cards, etc.
If you cancel my services I will refund 50% of the downpayment. This is because while you have reserved my time I turn other people away.

I generally ship via USPS Priority mail with insurance. When I am mail those inevitable mistake envelopes, I tend to use USPS first class.
I ship out the day after I complete the service.

How do you want the files?

I prefer lists, poems, etc. in WORD format. Please do not use spreadsheets or label formatting.

How long does it take?

I require 2 weeks to complete most jobs. If you need it sooner, I may be able to "rush" the job for an additional fee.

Can you imitate computer fonts?

Yes, to a certain extent. Keep in mind each calligrapher has a style of their own, a rhythm, so to speak, to their lettering so imitating is possible, but not perfect.