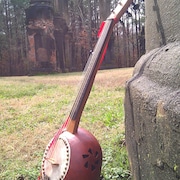 I build Banzas- the original banjo made from a gourd.

Announcement    Welcome to Jaybirdbanjo! Here you will find banzas- the ancestors of the modern banjo. Each banza is unique with an individual and exquisite tone. Listen to one being played here: http://www.jaybirdbanjo.com. Order a banza now or contact me for custom orders.

Welcome to Jaybirdbanjo! Here you will find banzas- the ancestors of the modern banjo. Each banza is unique with an individual and exquisite tone. Listen to one being played here: http://www.jaybirdbanjo.com. Order a banza now or contact me for custom orders. 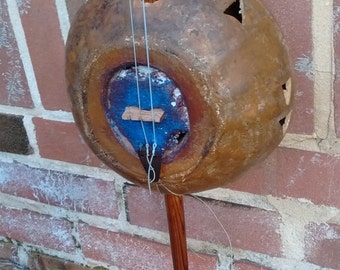 Two and a half string gourd banjo (banza) 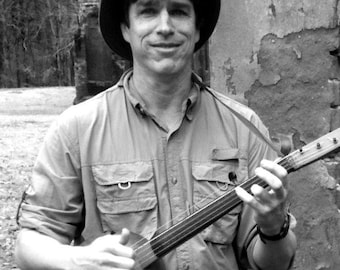 
Jason Smith is a builder and player of banzas. “Banza” was the name given in the early French West Indies colonies to a 4-string guitar-like instrument made of a skin-covered half gourd to which is attached a long, flat neck which supports strings. The banza was alson called a “banjer”, a “banjar”, a “bandalore”, and many other terms in the English colonies and mainland.

The banza gave rise to the instrument that was best-known as the banjo, with the body being made from primarily wood and metal. The banjo has contributed immeasurably to popular American music in past years, including ragtime, dixieland, jazz, and bluegrass. It is an honor to recognize the rich musical heritage and contributions of Africans and African-Americans to our culture by preserving such an important part of this tradition.

Jason begam learning his craft of banza construction in 1993 after meeting Scott Didlake of Jackson, MS. At that time Mr. Didlake was at the forefront of constructing banzas, which are the gourd ancestors of the modern banjo. Through a rich understanding of banjo history, innovative incorporation of modern construction techniques, and impeccable craftsmanship he built what are considered to this day the finest banzas. Jason was very fortunate to have studied with him and strives to produce instruments of his design and quality.

Jason uses high quality gourds grown primarily in Mississippi, and salvaged Mississippi heart pine, as well as imported woods. He builds banzas of many different sizes and scale lengths as well as different string configurations (from one or two strings “soprano banzas” to a full size “five stringer”, or even a guitar banza). Banzas can be built with or without frets. Contact Jason to place a custom order for a one-of-a-kind banza.

Last updated on May 9, 2022
Welcome to Jaybirdbanjo! I strive to make banzas of the highest quality.

Full refund only if instrument is damaged in shipping.

Currently I ship only in the U.S.