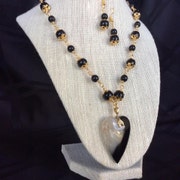 Announcement    Jewelry is made with semi-precious beads, high quality crystals. Be a part of my FaceBook group for special deals- The Jewelry Box https://www.facebook.com/groups/1329116657099427

Free shipping on orders over $35

Jewelry is made with semi-precious beads, high quality crystals. Be a part of my FaceBook group for special deals- The Jewelry Box https://www.facebook.com/groups/1329116657099427

Free shipping on orders over $35

Beautiful Beginnings from a Series of Difficulties

After my husband's employer closed their doors in 2012, we were grateful that he was able find work elsewhere. But that job meant packing up, selling the house and moving to a new town...away from everything we knew. And we did. Netarts, Oregon!

The ocean became my haven; my respite. I enjoyed low tide, high tide, storms and sunshine! I was sure I found heaven on earth!

And I began to collect-- rocks, shells and other treasures.

When my sister came to help me after a major surgery in 2014, I wanted to make her something as my way of saying thank you. Always the crafty sort, I used one of my "Oregon Jade" stones and made her a necklace. Soon I began getting requests to purchase my pieces and Oregon Coast Jewelry was born.

Then in 2017, my 91 year old father wasn’t able to be on his own, we packed up for a cross country trip to allow him to remain in his home with me as his caregiver. Once again, I found the sunshine, ocean and the storms that I love so much! It’s four years later and I’ve added more than just jewelry! I’m excited to bring my crafts to you!