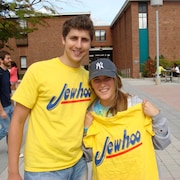 We are launching the Jewhoo T-Shirt Launch for Hanukkah 2020!

An awesome gift to give to your loved ones!

-“The Perfect gift for the Holidays"

You can help by purchasing our Jewhoo products which are perfect gifts for all occasions!

Over the past ten years we have donated portions of profits from the sales of our really fun, originally, bright yellow shirts to help both small and local Jewish organizations in the U.S. (such as : Chabad, Hillel, BBYO, MEOR, and many more!)

We are launching the Jewhoo T-Shirt Launch for Hanukkah 2020!

An awesome gift to give to your loved ones!

-“The Perfect gift for the Holidays"

You can help by purchasing our Jewhoo products which are perfect gifts for all occasions!

Over the past ten years we have donated portions of profits from the sales of our really fun, originally, bright yellow shirts to help both small and local Jewish organizations in the U.S. (such as : Chabad, Hillel, BBYO, MEOR, and many more!)

Organization aims to create solidarity. THIS IS THE HISTORY OF JEWHOO...
By DYLAN FRIEDENBERG - OCTOBER 26, 2010


A cadre of students has sprung up around campus wearing bright yellow shirts emblazoned with what appears to be the logo of a popular chocolate drink.

But a closer inspection would show that these shirts read not Yoo-Hoo, but Jew-Hoo.

The shirts are the start of a fundraising effort by a new group on campus called Jew-Hoo, founded by Eric Rovt, a senior double-majoring in accounting and psychology.

Rovt hopes to use Jew-Hoo to benefit the Jewish students and organizations on campus.

‘Jew-Hoo has three main goals: to create awareness of all the different Jewish groups at Binghamton University, to promote membership in these groups and to create solidarity between them,’ Rovt said.

Rovt and his supporters plan to achieve these goals through their website, www.jewhoo.net. Adam Heimowitz, a freshman majoring in computer science, designed the site. The site is frequently updated with information about the current events being held by the Jewish organizations on campus. There is also a weekly newsletter to which visitors to the site can subscribe.

In addition to the advertising that the Jew-Hoo site provides, the group plans to support campus Jewish organizations in other ways. Through T-shirt sales, Jew-Hoo was able to raise enough money to donate $180 to various Jewish groups on campus.

They also plan to co-sponsor events with the different Jewish groups, such as the Shabbat celebration called Oneg, which they co-hosted with the Maimonides Society Friday.

According to Rabbi Chaim Harkavy, director of the Maimonides Society, the event was a success.

‘Thanks to Jew-Hoo, double the number of students we normally have for a regular Oneg attended. We plan to make [our co-sponsorship with Jew-Hoo] a regular occurrence,’ Harkavy said.

Though it is seeking to work with SA-chartered groups on campus, Jew-Hoo is not an SA-chartered group itself. According to Rovt, Jew-Hoo has been in contact with SA representatives in attempts to become recognized by the SA, but Rovt does not want to take away funding from any of the already established Jewish organizations. Jew-Hoo’s funding currently comes solely from the sale of T-shirts, which are available when Jew-Hoo tables in the Union or on www.jewhoo.net.

Rovt indicated that Jew-Hoo initially faced some skepticism from other campus Jewish organizations, but many, including Hillel, now see the potential in the idea.

Shana Kantor, the executive director of Hillel, sees Jew-Hoo as a vehicle to get the word out on campus and provide a calendar of Jewish events.

According to Kantor, there is potential for Hillel to work with Jew-Hoo in the future, though they have not yet collaborated on any projects. Jew-Hoo is also looking to work with Chabad.

Rovt, who will be graduating in December, hopes that Jew-Hoo will ultimately expand beyond BU, promoting unity among Jewish students throughout the nation.