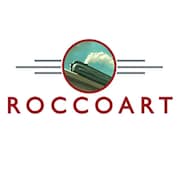 JohnRoccoArt is taking a short break

Note from shop owner JohnRoccoArt will be closed from Feb 16 to March 30th. Thank you for your patience, and I look forward to creating more prints for you in when I return.

JohnRoccoArt will be closed from Feb 16 to March 30th. Thank you for your patience, and I look forward to creating more prints for you in when I return.

John Rocco is the #1 New York Times bestselling illustrator of Percy Jackson’s Greek Gods and Percy Jackson’s Greek Heroes as well as the cover illustrator for all of Rick Riordan’s international best-selling Percy Jackson, Kane Chronicles, and Heroes of Olympus series. He has also written and illustrated several of his own picture books, including Blizzard and the Caldecott Honor-winning Blackout and has most recently illustrated How to Train a Train and How to Track a Truck. He has also illustrated books by Whoopi Goldberg and Katherine Patterson, and recently co-authored his first novel, Swim That Rock, to high acclaim. Before becoming a full-time children’s book creator, he worked as pre-production art director on “Shrek” for Dreamworks, and for Walt Disney Imagineering. He lives in Los Angeles.