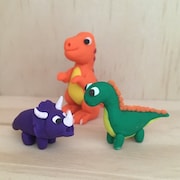 On July 7, 2020, I was brought to the hospital due to a severe depression with active suicidal ideation. As doctors struggled with adjusting my medications, I found my stay growing longer and longer. One day in a therapy group, we made clay figurines to put in a homemade zen garden. I was immediately drawn to the process, creating something from nothing, and so, I continued.

Each afternoon I would go up to the art room in the hospital’s psychology tower. I had about fifty minutes with the clay before the activity therapist would put it in the oven to bake. I tried to make at least two different animals during that time. Wanting to start with something simple, I first tried a pig. I progressed to my dog (whom I missed like crazy). By this time I was hooked, and the collection of animals lined up on my desk grew daily.

Eight long weeks later, when it was finally time for discharge, I decided I didn’t want to bring the tiny critters home with me. I wanted to give them to the nurses, techs, and doctors who helped and supported me so much during my stay. It was my way of saying thank you.

My first trip out in public after returning home was to the craft store to pick up polymer clay. I puttered with it on and off for the weeks that followed. Then, about a month and a half later, my biggest fear became a reality as I once again landed in the hospital due to my mental health. This time, though, I knew about the clay and my collection soon started once again.

The hospitalization was lengthy, lasting sixteen consecutive weeks as doctors and staff once again tested and tweaked different medications and forms of therapy. So, I kept making the little friends. They gave me something to smile about. As staff came and went from my room, I realized they gave others something to smile about, too. “These are so cute!” “I bet you could sell them.” “You should put these on Etsy!” The more I heard these remarks, the more I began to seriously think about what was being said. When at long last I left the hospital, the critters came with me.

I wanted to find a way to share the smiles with others. Maybe this could be something positive to come out of all the hell I had just gone through. I toyed with different ideas for the shop name, but continually came back to the word joy. This was what my creations had provided me. This is what I want my creations to provide others. And so, JoyfulPocketPets was born.

I wish I could say that was the end of my mental health struggles, but in reality I have spent over six months of the last year on hospital psychiatric floors. My struggle is with depression, but there are so many other mental illnesses that people face. I hope my story can shed some light on a very stigmatized topic. And I hope my creations can help put smiles on faces, no matter what struggle one is facing.