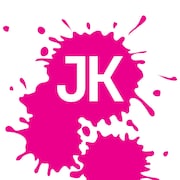 JustKirby is taking a short break

--There are very few things on this planet that Kirby loves more than donuts, and she is often easily bribed by food.

--If you can succeed in finding a horror movie that actual scares or disturbs her, you will be friends for life.

--Kirby is always down for a little hand-to-hand combat; she loves Krav Maga almost as much as donuts.

--She believes the world should never start before 10am as sleep is sacred.

--One of her dream jobs—for she has many—would be to design the kid’s coloring menus at restaurants (because yes, she still asks for crayons at her meals).

--Kirby is skilled in a variety of artistic mediums. From stone sculptures to papel picados, watercolor to face painting, graphic design to stained glass, websites to chalk art… She loves to learn new things (remember?) so she is always acquiring new skills. One thing she really wants to learn? Glass blowing.

--To date, Kirby has written one interactive adventure novel (the first book of the future seven book series), one coloring book, and one graphic novel. Her novel is the project she is most proud of.

--When Kirby graduated college, she swore she would never be self-employed. Currently, she is both self-employed and over-employed (but loving it).

--She has managed to combine a strong work ethic, competitive streak, perfectionistic tendencies, endless amounts of creativity, and a splash of OCD into an efficient, butter coffee-fueled working machine.

--Kirby is a firm believer in the oxford comma.

This list could continue forever, of course, but then it would ruin the element of surprise. And isn’t that one of the fun parts of meeting someone new? Learning about their eccentricities? So instead, let’s end on a note of tentative friendship.

If you're reading this, I already think you're swell; so why not reach out to me and see if you feel the same?