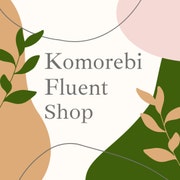 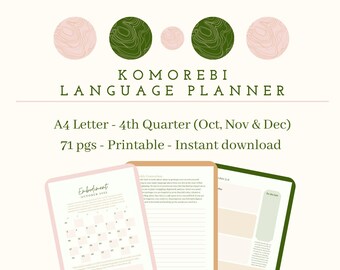 Komorebi Fluent started out of the need I saw for people to learn to modify their language learning to themselves instead of to other people. I've seen certain communities that are extremely toxic in their ideas on how to learn a language and I wanted to create a safe space that cultivated your curiosity around the language you want to learn or that you are already learning in a fun and creative manner. As a whole, many language learners will say that connecting your interests and everything you are to the language you are learning will help you learn it faster but often times resources aren't up to par with that mindset as they're full of boring vocabulary lists with example sentences you'd never hear from a native and grammar explanations that could put some of us to sleep. So, in August of 2020 I had the idea to create a holistic language learning planner which turned into the Komorebi Language Planner.

The word "komorebi" is a Japanese word that means "the light that filters through the leaves on trees." When I learned this word, it quickly became one of my favorites after my many years of learning the language because, as a child, I would watch this pattern drift across the walls and the floors for hours. Then, when I was working on the planner on a beautiful day in September, I caught myself following that same effect as it drifting down the wall in the living room. It's something that has always had a calming influence on me, especially since I've grown up surrounded by trees and forests, so, I decided on that as the name. I want this space to have a similar influence on people and for them to have a pleasant language learning journey instead of a stress filled one.

See this Seller Handbook article for a sample privacy policy you can customize for your shop.
If you ship to the EU or offer your listings to buyers there, you're required to have a GDPR-compliant privacy policy by 25 May, 2018.
Privacy policy
Etsy collects certain information in order to complete your purchase, including payment and shipping information. As a seller on this platform, I do not have access to your payment information. Etsy provides me with shipping addresses for the purpose of completing your order. This information does not leave the Etsy platform. I will not use your personal information to contact you outside of Etsy.

Why I Need Your Information and How I Use It

-as needed to provide my services, such as when I use your information to fulfil your order, to settle disputes, or to provide customer support;
-when you have provided your affirmative consent, which you may revoke at any time, such as by signing up for my mailing list;
-if necessary to comply with a legal obligation or court order or in connection with a legal claim, such as retaining information about your purchases if required by tax law; and
-as necessary for the purpose of my legitimate interests, if those legitimate interests are not overridden by your rights or interests, such as 1) providing and improving my services. I use your information to provide the services you requested and in my legitimate interest to improve my services; and 2) Compliance with the Etsy Seller Policy and Terms of Use. I use your information as necessary to comply with my obligations under the Etsy Seller Policy and Terms of Use.

-Etsy. I share information with Etsy as necessary to provide you my services and comply with my obligations under both the Etsy Seller Policy and Etsy Terms of Use.
-Compliance with laws. I may collect, use, retain, and share your information if I have a good faith belief that it is reasonably necessary to: (a) respond to legal process or to government requests; (b) enforce my agreements, terms and policies; (c) prevent, investigate, and address fraud and other illegal activity, security, or technical issues; or (d) protect the rights, property, and safety of my customers, or others.

For purposes of USA data protection law, I, Rebecca Hall, am the data controller of your personal information. If you have any questions or concerns, you may contact me at rebecca.komorebifluent@gmail.com.
Etsy prohibits the use of buyer information for unsolicited messages. See our Privacy Policy for more info.

In the future I will offer personalized orders! However, with the Komorebi Language Planner that isn't attainable due to the length and the amount of time it would take. Please feel free to leave a helpful review and I will take your advice into consideration with 2023's planner.

Due to variations in individual printers, ink types, and device display settings, colors can look slightly different when printed out. If this is the case, check your ink levels or consider recalibrating the color settings on your printer or display.

How to Print:
1) Add this listing to your cart.
2) Choose your payment method.
3) After payment is complete (allow 5 mins for Etsy to process) a download link appears.
4) Download from your purchase area (https://www.etsy.com/your/purchases).
5) Then they can be opened in your browser or any PDF-viewing program then go to File > Print

I suggest using 100 gsm white paper, formatted for US Letter and prints to A4.

Understand that because I do use color in the Komorebi Language Planner, if you take it to be printed professionally anywhere it will cost you more. I recommend using it on a tablet or a computer if you don't have the ability to print it as you can add text with programs like Preview (Mac) or Adobe Reader (free for Mac and PC) or you can also upload it into GoodNotes or similar apps as a template for digital note-taking.

For the 2023 planner I will be offering more accessible and affordable options. This was my first time creating this planner so I am still learning how things work and how to make things easier for people.

Digital files can always be downloaded through this link while signed into Etsy: https://www.etsy.com/your/purchases

If you purchased your files as a guest, the link to download will be in your invoice email.

If you have any other issues or questions feel free to message me here on Etsy and I will be happy to help you find a solution!

I am located in Kansas, USA (CST/ UTC-6), so any responses to messages will take place between 10am-5pm my time. I try not to work excessive hours so please understand and be respectful if I don't respond right away. I WILL get back to you, thank you for your patience.

Please note that if you are in a time zone with a significant time difference (such as +/- 12 hours) there will be a more significant gap in my responses. Be sure to let me know ahead of time if you can so I can do my best to accomodate!

You can contact me through Etsy under my profile picture in the top right of my shops page there is a contact button. If for whatever reason, that isn't working or you want to do a collaboration feel free to email me at rebecca.komorebifluent@gmail.com.