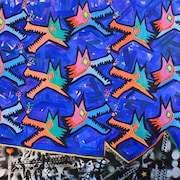 Announcement    Dmytro Kurovskiy is a Ukrainian artist and musician whose unique approach to creativity, whether music or art, brings joy to those who encounter it.

Dmytro Kurovskiy is a Ukrainian artist and musician whose unique approach to creativity, whether music or art, brings joy to those who encounter it. 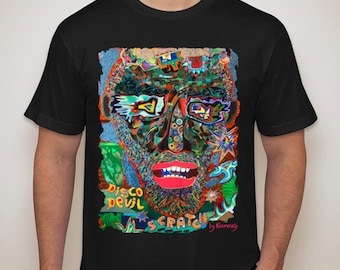 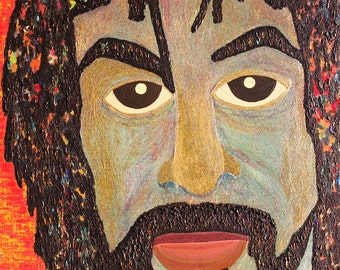 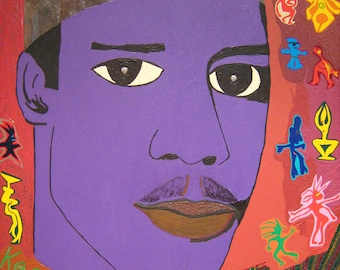 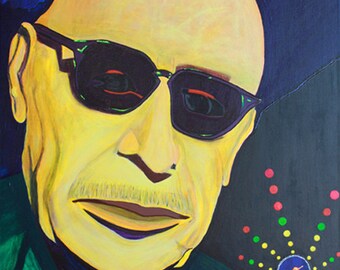 Dmytro Kurovskiy is a Ukrainian multimedia artist and musician. His interest in painting was initially inspired by music from the late 70s and early 80s. From the beginning, he was driven to create by an instinctive impulse of pure imagination. As a result, his expressive graphic works are powerfully thought-provoking and extremely interesting in composition.

Kurovskiy enjoys experimenting with new techniques that combine art, music and abstract design. His works (graphic works, collages and design objects) are in private collections in Ukraine, Russia, Germany, Spain and the USA.

The creation of this shop is a joint effort with the artist, working closely together to bring Kurovskiy Art to the world! See more Kurovskiy art at www.dmytrokurovskiy.com

For the whole story, see below:

Dmytro Kurovskiy was born in 1971, in Chernihiv, Ukraine. He attended the Kharkiv State University of Arts, graduating in 1994 as a flutist, teacher and composer. He lives and works in Ukraine (Chernihiv, Kyiv and Odessa).

Kurovskiy is a multimedia artist, photographer, poet, DJ and leader of Foa Hoka, a musical/multimedia project founded in 1990. In 2003, Foa Hoka became an open project which invited the participation of other open-minded artists. It has included electroacoustic live performances with video and DJ sets based on Foa Hoka studio materials and exhibitions of the Mboti Uchacha School, an independent art community which Kurovskiy co-founded in 2002. www.foahoka.com

His interest in painting was initially inspired by music from the late 70s and early 80s, while listening to radio programs prohibited in the Soviet Union. His earliest medium was markers, which his mother had gotten for him while in Poland. Kurovskiy, like an astronomer, investigated and carefully studied the signals received from faraway space - The West. While listening to this forbidden music, the consciousness of the young scientist formulated well-defined pictures from a range of collected information. The whole world existed simultaneously with him, but on parallel plane. The result was a series of portraits of well-known musicians and rock-bands. At the same time he began to express his thoughts on paper.

“I remember the kitchen table, in the evenings, under the radio waves of foreign music. Wild, joyful characters began to emerge on album sheets (and later on Whatman paper). Initially, it was soloists and then bands with big names: The Who, Adriano Celentano, The Rockets, ABBA, Johnny Rotten, Stars on 45, The Beatles, Kiss... and some super-mysterious groups: Africa, Cockney Rebel, Torold, The Blacks, Modvel... On the radio, not all can be heard, so the drawings were created in real time.”

Dmytro Kurovskiy’s paintings are interesting in their originality. They may be compared to such great art phenomena in the world history of fine arts as naive art, art-brut or art of outsiders; which in due time influenced Picasso, Miro and other artists of the 20th century. His small, but expressive, graphic works touch one’s heart deeply. It is that powerful and instinctive impulse of pure creation which induces the artist to create. As a result, we have the compositions of Kurovskiy, the musician, and the compositions of Kurovskiy, the painter.

Kurovskiy works with psychedelic urban art and what he calls “ironic reflections of fast lo-fi”. He enjoys experimenting with new techniques that combine art, music and abstract design. In 1997, he composed a compilation of poetry, “Somnabulistic Bug”. From 1994-2003, he worked with many theatre artists, such as Ukrainian artists Andriy Bakirov and Yurko Izdryk and Russian artist Olexandr Laptiy. In 2004, he had an exhibition at the Serious Pop Summit at the Academy of Fine Arts in Vienna, Austria. He has also participated in a great number of other projects, including avant-garde Kharkiv band, Kazma-Kazma, Elza, Chichka-Drichka, Suphina’s Little Beasts, Gnida and Amoebas, among others. He is also manager of Midi Free Studios in Chernihiv, where he has a vast collection of retro synthesizers and keyboards.

In 2007, the project “Love Never Dies” presented a compilation of Kurovskiy’s paintings over a range of years; some of them created more than 20 years ago. This exhibition can be called a retrospective review of Dmytro Kurovskiy. In it was seen his rock-idols of the 80s, the mood of Soviet freedom and expectations of the 90s, and the display of urban art present today. His art is filled with love; revealed in the artist’s attitude toward his characters, the people whom his pictures are devoted to and in the process of the creation of the art, itself. This love is also revealed in Kurovskiy’s musical side - whether studio tracks, DJ sets or his position as flutist in a theatrical orchestra. Love never dies; it is alive and well in Kurovskiy’s music and through his art.

Should you decide to return an item, it must be posted within one week of receipt of item. Return postage is buyer's responsibility. Money will be refunded (minus original shipping cost) once the item purchased is safely returned to the seller.

Payment is expected within 3 days of making a purchase.

Credit card payments are processed through PayPal. However, a PayPal account is not required. To pay by credit card, please follow the steps below:

1. Click "Pay with PayPal" at the end of the checkout process.
2. When you have been transferred to PayPal website, click "Continue" to pay with a credit card if you don't have a PayPal account.
3. Enter your credit card and personal info. Click "Review Order and Continue"
4. Click "Pay (dollar amount) Now"
5. Done!

Item will ship within 1-2 business days after receipt of payment.

Packaging: Collages / flat works are shipped with cardboard reinforcement and are wrapped in bubble wrap or enclosed in a bubble mailer.

Please contact me through Etsy if you have any questions. Thanks.