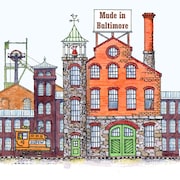 LelandManufactory is taking a short break

Note from shop owner The Manufactory is closed for a fall break. Re-opening in mid-October with plenty of cards and calendars! Thanks for looking!

The Manufactory is closed for a fall break. Re-opening in mid-October with plenty of cards and calendars! Thanks for looking!

About Eric Leland and his Manufactory...

It's been a long journey to get to where I am today, working full time in my basement and never, ever, ever wearing clothes that I can't get paint, grime, or ink stains on!

My design education began in 1996 at the North Carolina State University College of Design. There I learned, among other things, that there are many solutions to any design problem and it takes real persistence to uncover the best one. In 2001 I completed my Bachelor of Architecture degree.

After an internship in the North Carolina State Historic Preservation Office, I moved north to Baltimore, satisfying a lifelong itch to live in a city with no space between houses. I found employment at an architecture firm and from 2002 to 2007 I adjusted to professional life, learning to work with firm principals and clients to define problems and generate solutions. In 2007 I obtained architectural licensure from my native state of North Carolina.

However, also in 2007, I was overtaken both by wanderlust and by a growing realization that I was happiest when my work involved pencil and paintbrush. My wife and I took a leap across the Atlantic, and I enrolled in the postgraduate illustration program at University College Falmouth, in Cornwall, England. The course there emphasizes authorial practice - in a nutshell, taking responsibility for your own career - and I spent a year learning to generate projects from Cornwall's rich historic industrial landscape. I also saw a lot of rabbits! The following year, we moved on to Edinburgh, Scotland, where Anne completed a degree in architectural conservation and I mercilessly besieged old castles with my sketchbook. In 2009 we returned to Baltimore, and in 2010 I purchased and set up my first printing press in my basement. Since then, I have acquired more presses and moved to a larger, above ground space.

Last updated on May 10, 2022
Thank you for your interest in Eric Leland's Manufactory!

I am an illustrator and printmaker living and working in Baltimore, Maryland. My shop opened in January of 2011.

If you are not entirely satisfied with your order, contact me with your concerns. I may ask you to send the item back and then, once I receive it I will refund to you the amount of your original purchase, including the original shipping charge.

I accept direct checkout for payment. Sales tax will be applied to all orders as required by Etsy and local laws.

A NOTE ABOUT GREETING CARDS:
Rate increases have made it so that shipping a single card in a rigid, protective mailer at the first class package rate now costs me more than three dollars. However, the rates don't go up steeply from there. For orders of greeting cards within the United States, the first card will incur a shipping charge of $3.25, but additional cards in the same order will ship for no additional shipping fee. SO - it pays to buy more than one!

SHIPPING IN GENERAL:
I will ship your order within the time period specified on each listing. For most products, and for most of the year, this will be within three business days, but for certain items and at certain time periods (holidays and vacations) shipping may take longer - when extended shipping times are in effect, you'll see this noted on the shipping times with each listing. I ship my products in sturdy mailers via USPS first class mail, or via Priority mail for larger or more expensive items - see the individual listing for shipping options.

Due to increasing costs and complications, I am sorry to say that I am no longer shipping items to addresses outside the United States and Canada. Any customs duties for Canadian orders are the responsibility of the buyer.

I want every order to arrive in good shape in the mailbox of a happy customer, but I know that some times bad things happen in transit. If something has gone wrong, please let me know. In cases of loss or damage, I'll either grant a refund or dispatch a replacement depending on your wishes and what I have in stock. If items are damaged in shipping, I may ask you to return them to me at my expense so that I can see if I need to adjust my packaging.

Unless otherwise noted, all of my products are created by hand, with, naturally, the assistance of paintbrush or printing press. I am always working to improve my process, but please keep in mind that until I am perfect, there will be some endearing human variations in my individual products...

Please also note - I retain copyright in all my creations. Copyright does not transfer with the sale of an individual item!