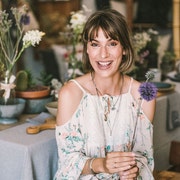 LindaFriedrich is taking a short break

We are taking a little break.
Thank you and have a lovely Xmas time and beautiful start into 2022!!
Linda

We are taking a little break.
Thank you and have a lovely Xmas time and beautiful start into 2022!!
Linda

Born and raised in Germany, Linda studied Product Management and Design in Munich.
Afterwards she worked for 3 years as a Designer & Product Manager in Germany and 2 years in China leading the Research & Development Team and worked as a trend scout in Shanghai and Hong Kong.
After these years of designing and merchandising mass market fashion - she immigrated 2008 to Israel.
As she did with fashion – she did with jewelry – she learned everything from scratch.

Linda entered the world of jewelry already in China and continued to study with several Silver- & Goldsmiths in Israel.
By now Linda lives and works in Tel Aviv.About her work:Linda's jewelry is a balanced result of my awareness & attention to my natural surrounding, which she believes everybody is influenced by. She loves to work with ideas or materials which she has just found on one of her strolls through nature.
Everything she picks up in her surrounding or even on her table is potential jewelry to her. Sometimes it’s the shape of an element which draws the attention, or it’s the nice structure of the surface. It can also be the combination of things lying accidentally next to each other on the ground just as it would have been arranged purposely. Natural elements which have been picked up just to decorate the studio, suddenly seem like a new piece of jewelry such as little rocks, bark and stones. For her current collection she was inspired mainly by the surface of tree bark and a little rock which reminded me to a huge raw piece of precious stone found in a mine.

Last updated on May 9, 2022
Thank you for visiting my shop!
All the items in my shop are designed and hand-made by me.

If for any reason the pieces you bought do not meet your expectations, let me know, I will work with you to make it right!

You may return any unused item you purchase for a refund or exchange for 30 days.

If you have an item that needs repair (after use) you can mail the item to me for free repair. I will mail the item back to you at no charge.

For customers living in Israel:

For customers in Germany I also accept "Ueberweisungen" to my German bankaccount. Please convo for bank details.

I offer FREE SHIPPING (registered airmail) for all destinations.
I will mail items within 1-4 days after payment has been processed unless the item is made to order and therefore needs up till 2 weeks before shipment.

If you are purchasing a few items, you will not be charged for additional shipping costs and your shipping fee for 1 item will cover the cost for the additional items you purchased.

My shipping method is International Registered Airmail service. It should normally take between 7 to 21 business days to arrive, but please note that occasionally delivery may take a few more days.
If you wish, I can use expedited shipping, which takes 4-6 business days and provides online tracking options, at the cost of $18 for USA and $24 for all other international destinations. Please convo me and I will send you a payment request.

in very urgent cases I could ship your goods with DHL Express which delivers within 2 days - please convo me for a price offer.

I can ship to a third party if you wish your item to be a gift. Please let me know.

I want my customers to be happy with their purchases, therefore if you have any questions or requests please feel free to contact me anytime.
I put much effort into making jewelry that you will love and want to wear over and over again.
If for some reason you are not satisfied- contact me and we will work it out.
Enjoy, and come back often!
Thanks a lot
Linda